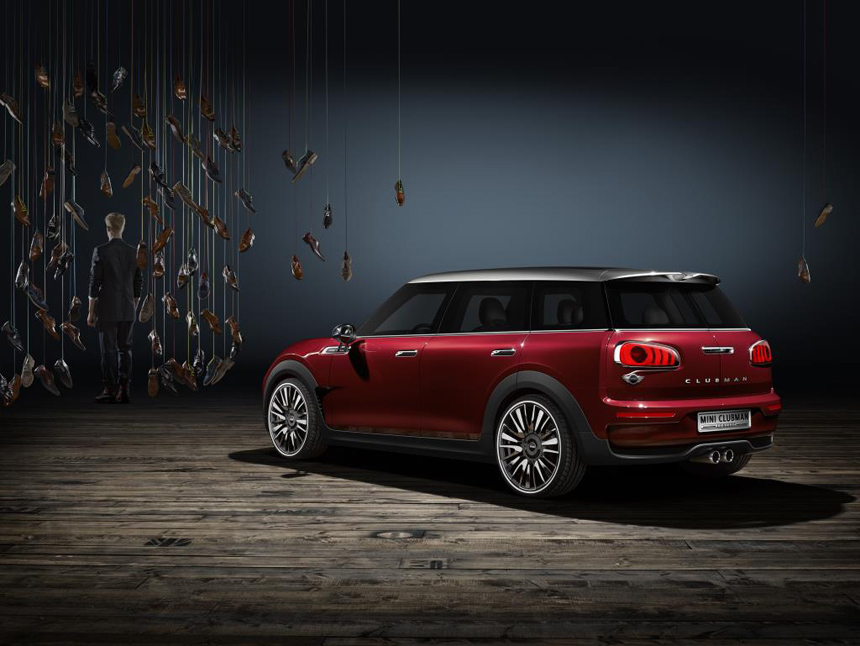 Munich/Geneva. At the 2014 Geneva Motor Show MINI presents the MINI Clubman Concept, showcasing a new brand philosophy for a higher class of automobile. 26 centimeters longer and just under 17 centimeters wider than the current MINI Clubman, the Concept comes over as sophisticated, cool and elegant. The iconic design is supplemented by high-quality details, plenty of space for functional features and selected materials. Refinement of the hallmark MINI styling ensures instant recognition, both on the exterior and the interior. The extensive colour and material concept redefines contemporary elegance and high-end quality in this segment.

A new class for the future of MINI.

“The MINI Clubman Concept shows how the MINI Clubman could be taken a step further: more interior space, a greater sense of high-end quality and yet still clever, bold and distinctive. In short: more car, more MINI,” says Adrian van Hooydonk, Head of BMW Group Design, explaining the approach to this model. For over 50 years now, MINI has stood for maximum use of minimum space. 26 centimetres longer and just under 17 centimetres wider than the current MINI Clubman, the MINI Clubman Concept applies this aspiration to a new class of automobile. As Head of MINI Design Anders Warming explains: “With the MINI Clubman Concept we are presenting a car with space, flair and style in a segment where the focus is mainly on function and utility. With clever ideas, emotional design and a cool blend of colours and materials, it offers an overall experience which remains unique in this segment to date.”

Even with larger exterior dimensions, the MINI Clubman Concept is instantly recognisable as a typical MINI. With the characteristic agility of the MINI proportions, the prolonged roof line clearly reflects the car’s extensive utility space. It also gives the silhouette a distinctive elegance, underscored by generous surfaces. The powerful, warm Berry Red colour shows surfaces and shapes to optimum effect. The roof in the colour “Blade” – a metallic grey – creates an elegant contrast with the warm red of the corpus.

Classic MINI design icons such as the hexagonal radiator grille, Side Scuttles, Black Band and the typical lights are designed in precise, high-end style. The modern, reduced interpretation of these features gives the MINI Clubman Concept a more sophisticated, charismatic look. The themes of aerodynamics and air ducting are clearly highlighted in the exterior design. All openings and outlets are integrated in the geometry and elegantly shaped. Clearly defined wheel arches and the roof spoiler accentuate the car’s dynamic appearance, underscoring the overall impression of sporty flair.

Typical MINI in every detail – the front section.

Seen from the front, the circular headlamps, hexagonal radiator grille and roof with add-on look clearly identify the MINI Clubman Concept as belonging to the MINI family. The radiator grille is strikingly elaborated and incorporates the bumper in the front section. The bumper is finished in Black Chrome, adding a touch of exclusive style to this functional element. Elaborate details such as the three-dimensional structure of the chrome ribs inside the front grille further enhance the front section. The high quality standards of the MINI Clubman Concept even extend to the surface modelling. Fine edges add precision and presence to the generous surfaces.

In the lower area of the front-end design there is a continuous air inlet which highlights the breadth of the MINI Clubman Concept, thereby emphasising its solid standing on the road. Meanwhile a finely wrought chrome rib appears to hover inside the air inlet, giving this sporty detail a touch of exclusive appeal. In the outer section of the front apron there are so-called AirCurtains – an aerodynamic feature that gives the wheel arches an aerodynamically optimised closure. These dynamically surround the lower part of the front section like two brackets.

Plenty of space for characteristic dynamism – the side.

Reduced to the essentials, the side view instantly conveys the qualities of the MINI Clubman Concept: a long wheelbase, flatly positioned windows and short overhangs reflect characteristic MINI agility. At the same time, the long roof line and the typical two-box design clearly emphasise the car’s high level of functionality and its generous utility space. Meanwhile the four doors reflect the extended exterior dimensions and increased functionality. Generous surface expanses elongate the side, while at the same time subtle surface modelling and precise lines make the silhouette appear flat and dynamic. Three chrome elements give the side section a sense of exclusivity with modern understatement. At the front, the Side Scuttle incorporates the filigree mirror base and turn indicator in an elongated element whose shape is echoed by the two electrical door openers. Integrated flush with the surface, these draw a line back to the rear which is taken up by the rear door handles. Above this, the surrounding shoulder line in chrome offsets the corpus of the car from the greenhouse and roof in hallmark MINI style. This so-called Waistline Finisher embraces the entire passenger cell, reinforcing the exterior graphics so typical of the brand. The 19″ light alloy rims in bicolour Black Chrome and Chrome finish are the highlight of the side view. A clear cup formation gives the elaborate multi-spoke design a highly dynamic touch. In between, glossy accents are added by non-cupped polished surfaces.

The MINI Clubman Concept is the first MINI to be fitted with a so-called AirBreather at the side. The AirBreather echoes the design theme of the AirCurtains in the front apron, cutting dynamically into the surrounding Black Band. The elaborate double roof spoiler at the rear is shown to best advantage from the top view. The third brake light is integrated in between the two wings of the roof spoilers in Formula 1 style. There are also two longitudinal sections of plexiglass which run across the entire length of the roof like rally stripes. In conjunction with the roof spoiler, this means that the distinctive dynamic air typical of MINI is applied to the MINI Clubman Concept from a bird’s-eye perspective, too.

The MINI Clubman Concept is broad and athletic in the rear view. The familiar MINI cascading – a staggering of multiple layers – gives the automobile a very solid standing and a muscular wheel orientation when seen from the rear. The most striking rear elements are the characteristic split doors. The typical continuous door frame is no longer made of sheet metal. The door graphic itself provides the frame surrounding the entire rear section like a discreet bracket. This newly elaborated design gives the whole rear a reduced, modern appearance. The horizontally positioned rear lights have a highly detailed finish. Their shape underscores the car’s broad standing and the dynamic orientation of the rear section. Selected chrome accents such as the “Clubman” inscription, the MINI emblem on the left-hand door and the door handles are specific details which emphasise the high-quality aspiration of the MINI Clubman Concept.

As in the front section, the aerodynamically optimised bumper finishes off the rear to the road.

Exclusivity and function interpreted in contemporary style – the interior design.

The new dimensions are brought to life by means of generous surfaces and more sophisticated spatial effect. The underlying design theme in the interior is the characteristic ellipse. Precise and contoured in its shaping, it comes over as more sophisticated while clearly displaying its origins. Around the ellipses, the interaction between several levels and surfaces adds lightness and a three-dimensional feel to the interior.

The unusual materials are especially worthy of mention: nubuck leather in a light Sky Blue, patent leather in rich Berry Red and black soft nappa leather ensure an exclusive interior atmosphere which is highly expressive. In between, elements in patinised silver add high-end accentuations. The patina gives them the character of familiar, fondly used items. Decorative strips in blue limed ash grain convey cool, modern elegance. The two highly expressive fabrics Tweed Grey and Black Twill set an attractive counterpoint to the classic value attributes of wood, leather, silver, thereby creating the familiar MINI interior experience. Small details such as the buttons with Union Jack embossment on the seats and central console, contrast stitching, piping or red accentuation surfaces in the sunblinds which only appear when these are folded down all add a touch of surprise to the mature character of the MINI Clubman Concept.

The interior element of the MINI Clubman Concept with the most powerful presence is the leather-covered instrument panel. With a surround in blue limed ash grain and a white porcelain finish, the black upper section of the instrument panel has a hovering appearance. Indirect rear lighting of the gap reinforces this impression and gives the area in front of the driver and front passenger an extremely high-end ambience. The linear air vents have patinised, silver-plated surrounds. Between the air vents there is an area in Black Chrome which can be back-lit if required that provides additional information for the driver and front passenger. The suggested “Faded Diamonds” rhombus pattern gives the Black Chrome surface a particularly high-quality structure. The lower section of the instrument panel is finished in Berry Red patent leather, providing an extrovert yet sophisticated contrast to the more discreet design of the upper half.

Multi-layered and light – the door design.

The newly interpreted ellipse in the side runs dynamically across the two doors to create a visual link between front and rear. The armrests in blue nubuck leather appear to hover in the doors, while behind them there are practical storage compartments. The decorative surfaces in the doors have indirect backlighting to underscore the inviting, contemporary ambience. The side mirrors and roof liner recede discreetly into the background due to use of high-quality fabric Tweed Grey in salt-and-pepper look, while the quality weave of the fabric Black Twill with classic black-and-white contrast on the floor and mats makes for an elegant finish.

The concept of spatial function in the rear is rounded off with clever storage facilities in the split doors as well as a double load floor. The pouches in the doors are elaborately fitted with nubuck leather in Silk White. They are placed within convenient reach and help make optimum use of space in the luggage compartment. The double load floor provides additional storage capacity.

The display area in the centre console (160mm x 150mm) adapts according to the content selected or the situation on the road. Three “intelligent” toggles are assigned the relevant content according to selected content or driving functions. Above and beyond this, the three toggles can also be freely programmed and assigned particular functions according preference. The haptic quality of the toggles means that the various functions can be operated during travel without looking. Here the MINI Clubman Concept has taken classic operating elements that have been a part of MINI for 55 years and consistently advanced them.