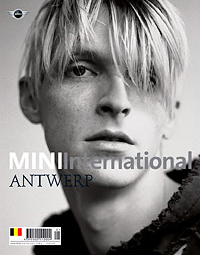 The original MINIInternational magazine began in 2001 with issue #1.  Published in Germany, it was available in German, English, French, and Italian.  Rather than focusing on MINI automobiles, MINIInternational was an urban lifestyle magazine.  Each issue featured a different city; issue #1 covered Antwerp, Belgium.  Inside each magazine was a CD devoted to artists and bands from that city.  The CD in issue #1 contained five tracks from Carlo Peters.

Beginning with #39 in 2009, MINIInternational was replaced by THE MINI INTERNATIONAL.  But the first issue will always be the one to collect.