MINI has always stood for fun, community, and technology, so it’s not surprising that MINI embraced the Internet and social networking.  Not just for marketing, but to connect a community of MINI owners.  From the start, MINI USA created an Owners’ Lounge on its website to give owners a place to discuss and show off their MINIs.  They have created official blogs and event websites.  MINI has also taken advantage of popular social networking sites to reach out to MINI owners, potential owners, and fans.

MINI United – Begun for MINI United 2009, this site is now a global news and social networking site from MINI. 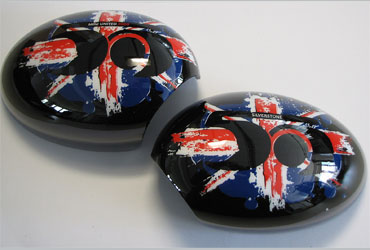 Shown here are the mirror caps from MINI United 2009.  The design celebrates MINI’s 50th birthday and the stylized Union Jack acknowledges MINI’s British heritage.  On the right cap is written “MINI UNITED 2009” and on the left cap is “SILVERSTONE”, the location for MINI United 2009.