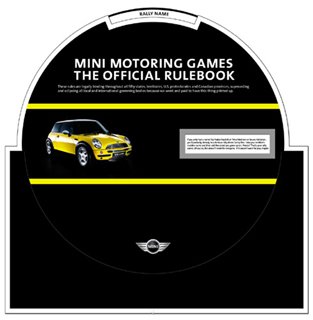 The MINI Motoring Games: The Official Rulebook ad came out in mid-2002. The ad reads:

These rules are legally binding throughout all fifty states, territories, U.S. protectorates and Canadian provinces, superceding and eclipsing all local and international governing bodies because we went and paid to have this thing printed up.

The ad insert has a rotating wheel that describes road games such as License Plate Black Jack, The Alphabet Game, Songscan, and License Plate.