MINI is a car company and much has been written about its vehicles’ influential design.  MINI is also a strong brand and from the beginning the company has been consistent in its branding.

The company is now applying these principles to its dealership buildings.  One-by-one MINI USA is opening new dealerships and renovating older ones under strict design guidelines matching its marketing design.  The new urban buildings are black and boxy, with colorful rectilinear shapes and borders primarily in blue, green, orange, and yellow.  Like the MINI cars themselves, the building design is modern, elegant, and fun.

One can read lots of articles covering the openings of new MINI dealerships over the past few years.  Most focus on the MINIs and the business and economic effects.  However, a recent article from the Toronto Star goes beyond the norm to intelligently discuss the urban design aspects of the new building in Toronto.

Occupying a landscape of industrial relics and commuter-oriented highways, this is a piece of architecture that brings new life to an area in transition. Sitting in the shadow of the nearby BMW building (the German auto manufacturer own Mini), it helps create a critical mass of visual interest and activity in a long-neglected corner.

That may be true, but it also has to fill space in the city, which means it must deal with nagging issues such as presenting a public face, being a good neighbour, enhancing connectivity and so on. For the most part, it fulfills its urban duties with aplomb.

Thus, the dealership design fulfills many roles.  Obviously its practical purpose is to house the MINI sales and service departments.  It furthers the strong branding and marketing position of the company.  It foreshadows the characteristics of the MINIs themselves.  And it potentially provides a spark of progressive urban design around which other architects and planners can develop.  Surely it helps sell cars.

A HUNDRED MILES A DAY KEEPS THE DOCTOR AWAY.

When you feel like life’s going nowhere, go somewhere. Join MINI owners from around the country on an epic road trip across America. It’s called MINI Takes the States. Don’t worry about taking time off. Who needs vacation days when you’ve got sick days? LET’S MOTOR.® 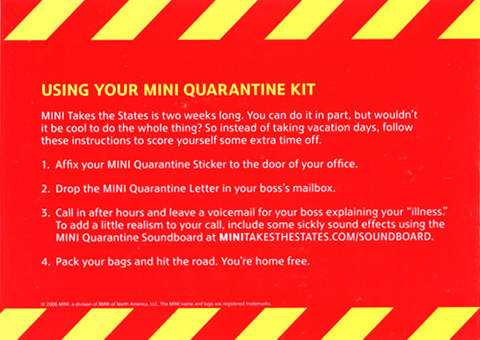