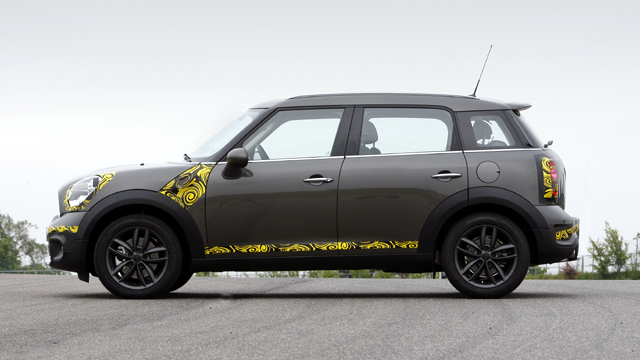 The professionals at Auto Express test-drove the forthcoming MINI Cooper S Countryman and have published their impressions.

Stretching past four-metres in length and offering four-wheel-drive, the big question is this…

Can it keep that essential MINI quality: driving fun?

The answer appears to be Yes.  They liked the lack of corner roll, acceleration, fuel efficiency, and improved interior. 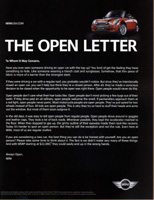 At the time of the launch of the MINI Convertible in the US in 2005, MINI USA created this ad.  THE OPEN LETTER ad was an open letter to people considering buying a Convertible to determine whether they are open people.

THE OPEN LETTER ad was found these magazine issues:

The text of the ad reads:

To Whom It May Concern,

Have you ever seen someone driving an open car with the top up? You kind of get the feeling they have something to hide. Like someone wearing a trench coat and sunglasses. Somehow, that thin piece of fabric is more of a barrier than the strongest steel.

If they were driving a car with a regular roof, you probably wouldn’t notice. But since they intentionally closed an open car, you can’t help but think they’re a closed person. After all, they’ve made a conscious decision to be closed when the opportunity to be open was right there. Open people would never do this.

In the old days, it was easy to tell open people from regular people. Open people drove around in goggles and leather caps. They took a lot of back roads. Whenever possible, they kept the accelerator mashed to the floor. When they stopped to gas up, the grimy outline of their eyewear made them look like racoons. Today it’s harder to spot an open person. But they’re still the exception and not the rule. Even here at MINI, most of us are regular roofers.

If you are considering a new car, the best thing you can do is be honest with yourself. Are you an open person? Please take some time to think about it. The fact is we didn’t make very many of these things. And with MSRP starting at $22,000,* they could easily end up in the wrong hands.