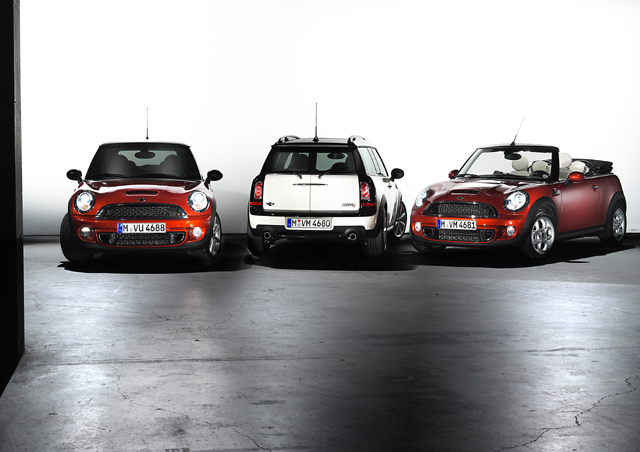 The fun-to-drive MINI, still guarantees go-kart handling and a fun driving experience, but now with eye-catching design modifications, all-new engines and innovative equipment upgrades, the revamped 2011 MINI is equipped to be the most popular to date.

The changes underpin both the premium character of the brand and maintain MINI’s position as a segment leader when it comes to fun and efficiency.  The range of customization options available for the 2011 MINI vehicles – which continue to be built precisely according to customer specifications – is more appealing and extensive than ever.

The fall introduction of the 2011 MINI will include the extensively upgraded four-cylinder engines, which were developed utilizing BMW Group’s expertise in the field of engine development.

The exterior styling now has a precision-modified design, which showcases its enhanced sporting potential.  A new geometry for the front bumper and larger deformation zones reduce the risk of injury in a collision with a pedestrian or cyclist.  These new details merge seamlessly with the overall appearance of the new model.  The designers went to great lengths with the three-dimensional sculpting of the newly designed body elements to ensure that the customary MINI proportions, including its short overhangs, were kept intact.

The modifications in the lower section of the front apron are considerably more prominent.  Here, the borders of the light units and foglamps now have more pronounced three-dimensional contours.  The lower air intake on all the model variants is also given greater visual emphasis.  On the MINI Cooper S, a black cross-piece accentuates the width of the car, while air intakes (with optional chrome frames) guide cool air to the brake discs and add to the sporting appearance.

The hallmark MINI circular headlights have newly-designed light sources with modified styling.  Black headlight reflectors, which were first featured in the Camden anniversary model, are available as an option on the Cooper and Cooper S.

Looking at the car from the side, the new design of MINI Cooper’s familiar side scuttles  provide an extra, finely-judged touch of elegance.  The glass-like lens cover of the indicators now has a striking structure formed from concentric circles.

LEDs optimize both the signaling effect and contemporary appearance of the rear lights on all MINIs.  Standard dynamic brake lights flash to warn vehicles following behind if the MINI is braking particularly hard and prompts them to follow suit.  This advanced light technology also provides the MINI with a very distinctive look at night.

Other new features include the relocation of the reverse light and rear foglamps, now located in the lower section of the rear bumper, housed in a centrally positioned red strip of lights.

Attractive new additions to the range of exterior paint finishes and standard and optional wheel variants offer customers additional scope for personalizing their new car.  The new metallic paint finishes (British Racing Green, Spice Orange, and for the MINI Cooper S – Eclipse Grey), can be specified from launch.  Ice Blue will be available at a later date.

All models can be ordered with a selection of innovative equipment features to enhance comfort, safety and the familiar MINI personality. Adaptive Headlights are available for the first time on a MINI in conjunction with the optional xenon lights.

This technology allows the headlights to follow the line of upcoming corners to ensure maximum illumination of the road surface.  The steering angle, yaw rate and speed of the car are all taken into account in determining the beam angle of the headlights.  In addition, customers can now specify an automatic dimming function not only for the rear-view mirror but for the exterior mirrors as well.

Inside the cars, the newly designed controls for the audio and air conditioning systems ensure optimized functionality and ergonomics.

Combined with the horizontal geometry of the interior and, in particular, the instrument panel, the displays in their purist, round design characterize the overall design theme of the cockpit.  The central element is the MINI-signature center speedometer.  The displays and controls for the entertainment system as well as the display for the optional MINI Connected and Navigation systems are integrated in the speedometer, while the tachometer remains a separate unit positioned, as befits a sporting car, behind the steering wheel in the driver’s line of sight.

A round transmitter finished in typical MINI style replaces the conventional door and ignition key, with the driver controlling engine operation with a start/stop button.  All instruments and controls are very smooth and easy to operate, positioned at the right point for optimum ergonomics.

The interior lighting reflects typical MINI style and class, with the addition of ambient lighting which can be varied in five stages from warm orange to sporting blue.  Serving as discreet “waterfall illumination” from above and as indirect illumination of the roof lining, the door storage bins and the door handle recesses, this illumination scheme creates a unique atmosphere inside the 2011 MINI.

The cutting-edge exclusivity of the interior is further underlined by harmonious colors and high-quality materials.  The model-specific selection of seat upholstery, trim elements and color lines have also been extensively updated.

The range of seat upholstery, interior colors, trim elements and color lines for all models of the new MINI family has also been extensively revised.  Among the newly introduced options are the Cross Check cloth/leather combination, the interior color Polar Beige, trim elements in Striped Alloy, Black Checkered and Pepper White, and the Satellite Grey and Toffee Color Lines.

The selection of available colors and materials is set out on a model-specific basis.  What’s more, the Rally, Classic and Scene “design worlds” have been introduced for the first time as a basis for creating a configuration of the MINI which fits the owner’s personal style.  Each of these design worlds comprises a carefully coordinated combination of body paint finish, roof color, wheel design, interior color, upholstery, trim elements, color line and other visual details.

They represent a recommendation by the MINI design team and lend each car an extremely coherent character.  In customary MINI style, additional – and almost limitless – customization can be achieved by varying the individual components of each design world and adding further items from the extensive range of equipment and accessories.

All the models in the new MINI family come as standard with a wealth of interior features which underline their high level of quality even more strikingly than before, as well as ensuring optimized functionality.

The distinctive design of the cockpit, all the controls and the door and side trim exudes cutting-edge exclusivity, a virtue now accentuated further by an extremely harmonious color scheme and high-quality materials.

All of the buttons and switches (and their surrounds) on the center console below the center speedo are now black, as are the controls and framing of the audio system display. The air conditioning controls are bordered by a chrome ring, and another chrome highlight can be found in the steering wheel. The keypads of the optional multifunction steering wheel are also in black.

More fun with even less guilt: The MINI engine

Cutting-edge drive system technology is the headline act in the improved range of engines for the new MINI family.  Both MINI Cooper and the turbo-charged Cooper S models are equipped with an improved 1.6-liter four-cylinder engine. The engines include a host of technical features whose development is rooted in the engine expertise of the BMW Group, allowing both the Cooper and Cooper S to perform even better than the previous models did.

The 2011 MINI vehicles are expected to maintain their impressive fuel economy ratings, but official figures will be issued closer to delivery this fall.

Both the MINI Cooper and the MINI Cooper S engines are equipped with fully variable valve management, which is based on the VALVETRONIC system used in BMW engines.  This technology optimizes the engine’s responses and, at the same time, significantly reduces fuel consumption and emission levels.

New technology in the MINI lineup makes its contribution to further reducing fuel consumption and emissions.

All MINI models come with a new, self-adjusting clutch.  Automatic readjustment ensures that the pedal feel you expect from a MINI is there to be enjoyed over the car’s full service life.  Plus, the synchronization of the gears is further optimized by a carbon coating for the clutch linings.

The modified structure of the body shell as well as a wide range of safety features help to ensure the 2011 MINI meets or exceeds all accident-protection requirements. In a recent NHTSA test, MINI excelled in all aspects with four- and five-star ratings.

Reflecting the premium standard of the brand, MINI models come with a wide range of safety equipment, including six standard airbags to enhance occupant safety. Dynamic Stability Control (DSC) is standard on all models and Dynamic Traction Control (DTC) is optional. DTC also includes an EDLC (Electronic Differential Lock) function that controls wheelspin on the drive wheels during acceleration by using front brake force to manage the speed and torque differential between the wheels.

Brake Assist detects emergency operation of the brakes and builds up maximum brake pressure very quickly.  Hill Assist start-off assistance, in conjunction with DSC, maintains brake pressure for up to three seconds after the brake pedal has been released and before the clutch has been engaged, to prevent the car from rolling back when setting off on an uphill gradient.

Performance tires standard on all MINIs

The MINI Cooper S models boast run flat tires as yet another standard feature, modified in this case to reflect the suspension set-up of the MINI. Thanks to their failsafe running characteristics, these tires allow the driver to go on motoring even when a tire is completely flat, covering a distance of up to 90 miles at a maximum speed of 50 mph.

And every 2011 MINI is equipped with a Tire Pressure Monitoring system (TPM) that permanently monitors air pressure and informs the driver in the event of an emergency.

The new audio and navigation systems and optional integration platforms for external music players and mobile phones all offer top-class entertainment and communications capability.  All the radio systems include an MP3-compatible CD player and AUX IN connection to hook up external music players with the on-board audio system.  Even the standard-fitted MINI CD radio comes with six loudspeakers.  The radio now boasts newly designed controls, and the radio’s volume control and station selector are now positioned at the same level.

In conjunction with the Bluetooth mobile phone preparation with USB audio interface, which also includes a snap-in adapter in the center console with charging function and a roof aerial, both the MINI Connected and MINI Connected with Navigation system allow the use of add-on functions supported by a connected mobile device.

These include audio streaming via Bluetooth, album cover artwork display on the on-board monitor, Web Radio, and innovative office functions.  For example, caller lists stored on a mobile phone and business cards from contacts can be viewed on the on-board monitor.  In addition, the optional voice output function allows calendar entries recorded in a smartphone to be read out.

Accessories – Unique Features for the Individualist

Supplementing the car’s standard equipment as well as the options offered by the factory, the new MINI may be further personalized through a wide range of Genuine MINI Accessories.  All of these items provide a perfect match for the 2011 MINI and meet the quality and safety standards of the BMW Group.

Roof Graphics and Exterior components made of carbon-fiber

By tradition, special roof graphics and mirror caps play an important role in customizing the MINI. The 2011 MINI offers the Union Jack, Checkered Flag and the letters “MINI” amongst its roof graphics.

Mirror caps and door handle trim with the Union Jack and Checkered Flag motifs highlight the British heritage and sporting DNA of the MINI.  And to add to this, the 2011 MINI is also available with exterior components from the John Cooper Works Tuning Range made by hand from carbon-fiber-reinforced plastic. These include panels for the front air scoop, the exterior mirrors, and the grab handle on the tailgate.