Here’s the News Release from the Rover Group that introduced the new MINI to the world exactly 13 years ago today.  It was released on September 8, 1997.

The letter features the Rover Mini logo at the top and reads: 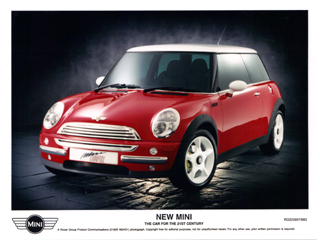 See a larger version of the Rover Group News Release (1997).

Note that at that time, Rover Group and BMW Group were still using the name “Mini” instead of the “MINI” they ended up using at launch.  Also, the production location and date soon changed to Oxford and 2001.

A photograph accompanied the news release which featured a Chili Red and White MINI Cooper.  Notice the different side mirrors, side scuttles, and the Rover Mini front badge.