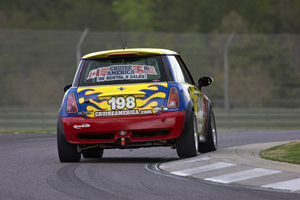 [Previously we reported that RSR Motorsports placed 4th, 14th, and 19th.  The GRAND-AM website showed those results which were qualifying results.]

Making the podium were Sarah Cattaneo and Owen Trinkler with the No. 198 MINI Cooper S placing 2nd.

BJ Zacharias came in 13th place in the No. 196 MINI. Team owner Randy Smalley wasn’t listed in the results, so it’s unclear whether he co-drove.

VJ Mirzayan and Dicky Riegel placed 14th in the No. 197 MINI.

This race will be broadcast on SPEED at 9:00pm ET on Saturday, September 18th.

See the official results for the race from the GRAND-AM website.

With the updating of the MINI Configurators for 2011, it was time to update the MINI colors page. New colors (or colours if you’re in the UK) for 2011 are:

Note that Royal Grey Metallic has returned.  It was last available in 2006. 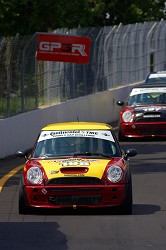 RSR Motorsports will end the GRAND-AM season later today as they try for three class wins in a row.  As we reported, RSR recently won back-to-back at New Jersey and Quebec.  For the Salt Lake City 200 at Miller Motorsports Park in Utah, the team is mixing it up:

Read the article RSR Motorsports Hopes for Three-peat at Miller.

More information on the race from the GRAND-AM website.

Modern MINI is a bi-monthly magazine from the UK which started publication in 2006.