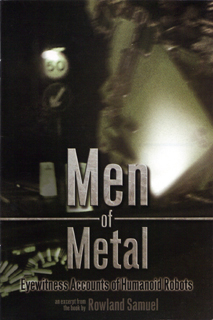 This 2004 ad insert was part of a viral ad campaign by MINI USA’s then advertising agency Crispin Porter + Bogusky.  The cover states that this is “an excerpt from the book by Rowland Samuel”.  The stapled 37 page booklet contains four pages of black and white photos and an Author’s Note at the end.  The story involves an engineer in Oxford, England who builds a robot from a MINI Cooper.

The Men of Metal booklet can be found inserted in the following magazine issues:

Note that the website address in the excerpt no longer works.