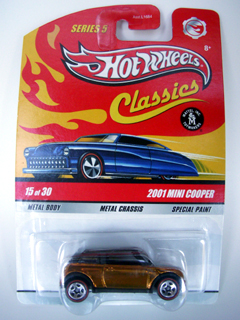 Back in March we featured a Hot Wheels 2001 MINI Cooper from the 2002 First Editions series.  Since that car was released MINI has become a “Classic”.

Recently issued and available in stores now is this Hot Wheels Classics 2001 MINI Cooper.  The die-cast MINI is number 15 of 30 from Series 5.  According to the description it has a metal body, metal chassis, and special paint in a copper-gold color.