Today we have the last item in our “collectible of the day” series.

LET’S HAVE A WARM HOLIDAY SEASON AND
A HOT RODDIN’ NEW YEAR.

The R50R MINI Robots were sold at US MINI dealerships for $20 each.  They also appeared in the MINI MOTORINGGEAR SPRING/SUMMER 2005 catalog.

See the Men of Metal ad. 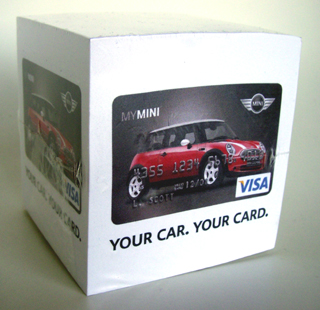 Shown is the MyMINI Card notepad produced in 2006 to promote the MINI credit card.  The displayed card features a Chili Red and White MINI Cooper with the tagline “YOUR CAR. YOUR CARD.” below.

The square cube of paper measures about 3″ on each side.

LET’S GEAR IT TO GO. Let’s throw ’em on and lace ’em up. Let’s pull no punches. Let’s take no prisoners. Let’s take no wooden nickels. Let’s run it hard. Let’s put it away wet. Let’s walk the walk. Let’s back the talk. Let’s keep the rubber side down. LET’S MOTOR.™

This two-sided ad insert shows a MINI with changeable wheels. You can pull down the inside sheet to display various wheels, some real and some custom. 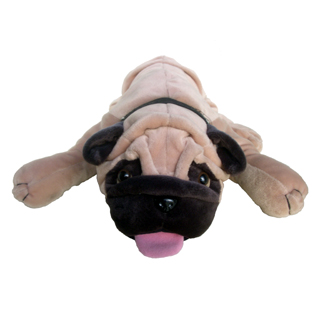 This unusual and possibly rare MINI Lying Plush Bulldog was purchased in March 2004 from a MINI dealer.  It has a similar look, with the same MINI collar as the original MINI Plush Bulldog only it lies flat instead of sitting up.

It would seem to be part of the MINI MotoringGear collection, but does not appear in any of the known catalogs.

Please contact us if you know anything about this item.

See all of the MINI Bulldogs.

Two years earlier MINI USA produced this MINI training box 2003.  The box in 2003 was made from thick black card stock and held closed by a elastic band.  Inside were several items including 12 tabbed folders covering:

Also in the box were dealer and owner’s items including: 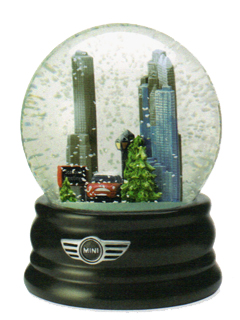 From 2002 through 2004 MINI USA sold collectible snowglobes as part of their MotoringGear collection. They were limited editions and there was a different one each year.

Shown is the MINI Snowglobe 2002.  It features a Chili Red MINI.  From the MINI MotoringGear Fall/Winter 2002 catalog:

Once these snowglobes sold out, they could often be found for sale on MINI forums or eBay for upwards of $100 or more.

We previously featured the WORD OF THE DAY gas pump signs.  Today we have another set.  These philosophical MINI gas pump signs are 19.75″ wide by 11.75″ high and are dated 11/15/05.  Shown are just a few of the variations.

Above left is version #1:

HAS “PAY AT THE PUMP” MADE US LONELIER PEOPLE?
Every once in a while, go inside and pay. Talk to the cashier. Ask him about the craziest thing he has seen at the station. You’re bound to hear a great story. But if he just smiles and says, “Here’s your change,” that’s okay too. It’s just nice to talk to people.

Above right is version #2:

MAKE TODAY CO-PILOT APPRECIATION DAY. Every so often, do something nice for your navigator. Like buy them a salty snack or some fake designer sunglasses. But remember, if you get them a cassette of the best bluegrass hits from the 80’s, don’t come crying to us if they actually play it.

WHY DON’T WE TALK TO EACH OTHER AT GAS STATIONS?
Why can’t this be another opportunity to meet people? You never hear stories like, “Yeah, we met at the gas station. We’re both premium octane, no receipt people.” After all, destiny can strike anywhere. Including the filling station. 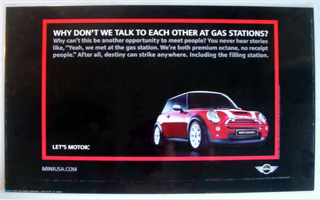 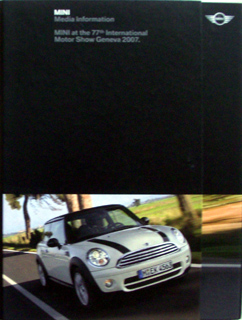 Lift the magnetically-held front cover to reveal a CD attached to the inside.  On the right side, a pocket holds a stapled press bulletin and two booklets: “Text” and “Photos” both dated 3/2007.  The two-page, stapled Press bulletin is dated March 2007 and titled “Get the racing feeling: the John Cooper Works Tuning Kit for the new MINI Cooper S.”.

The booklet titled “Photos” contains 19 pages, nine of which have glossy color photos of a Pepper White and Black MINI Cooper D and a Pure Silver MINI One.  Other pages have information about the included CD (mentioned above) in both German and English.

The CD contains the full content of the Press bulletin as well as MINI product photos and runs in a web browser. 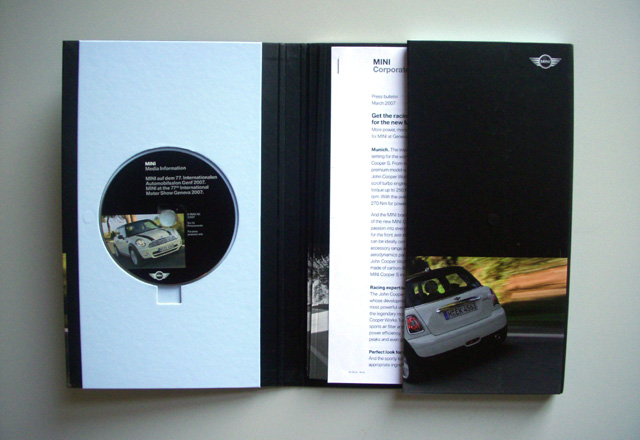 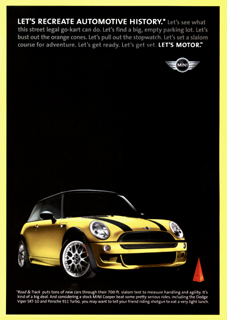 From early 2004 we have this interactive ad insert from Crispin Porter + Bogusky.  The fold-out ad has 8 punch-out folding orange cones to set up your own slalom course.

The footnote of the ad reads:

The ad insert can be found inside the following magazine issues: