X-raid Team 9th after stage 6 at The Dakar

Today is day 7 of the Dakar Rally, a rest day in Arica, Chile.  After 6 stages, the X-raid Team #305 MINI Cooper S Countryman ALL4 is in 9th place.  The French MINI ALL4 Racing drivers Guerlain Chicherit and Michel Périn are making a strong showing despite some minor setbacks:

The French crew of Guerlain Chicherit and Michel Périn began the special 10th on the road with Périn sporting a hand injury sustained when the new Mini All4 Racing was attached to a towrope in the desert on Thursday.  Chicherit was running in eighth overall through PC1, up to seventh after PC2 and a fine sixth at PC3.  He eventually finished the stage in seventh place and moved up to ninth overall heading into Saturday’s rest day.

“Guerlain drove very well in the Mini.  He was driving carefully and is now inside the top 10, which is great.  We now need to analyse the stages that we have left and where we could possibly get some time back.  We know from last year that this will not be easy, but there are some stages where we can make up some time.” 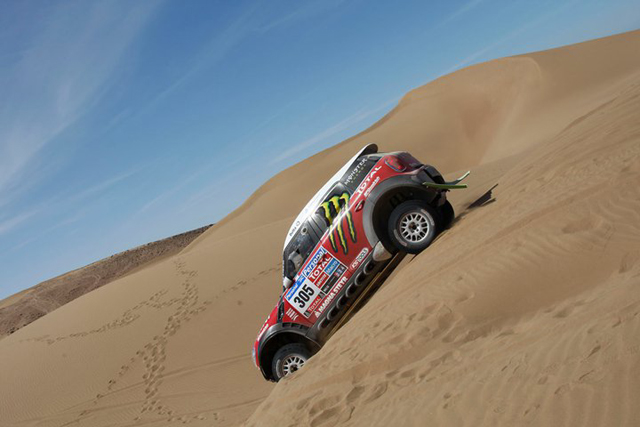