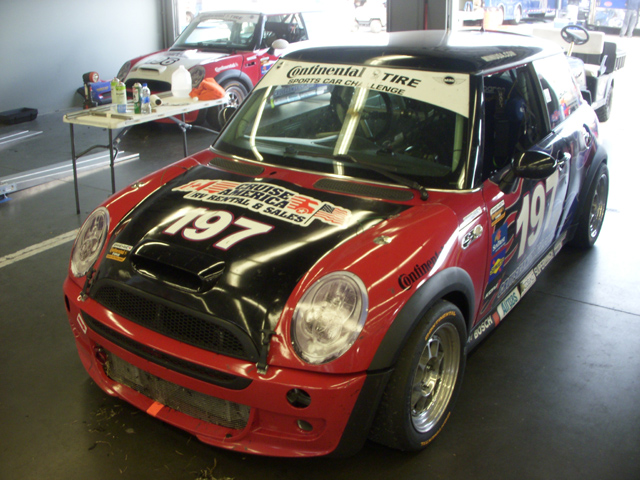 RSR Motorsports MINIs in the garage at Daytona 2010

The GRAND-AM Continental Tire Sports Car Challenge season begins this Friday, January 28th, with the GRAND-AM 200 at the Daytona International Speedway.  MINI will once again be represented by RSR Motorsports fielding three MINI Cooper S racecars in the ST class.  The line-up for 2011 will be:

ORLANDO, Fla.—With more than twenty test days completed, RSR Motorsports is ready to see a green flag during this weekend’s GRAND-AM Continental Tire Sports Car Challenge season opener at Daytona International Speedway. The trio of MINI Cooper S race cars—sponsored by Cruise America, Thor Motor Coach and US LED—will take on the ST class in hopes of picking up right where they left off last year.

Sarah Cattaneo and Owen Trinkler, driving the new No. 198 RSR Motorsports MINI, are encouraged after Test Days at Daytona just a few weeks ago. “The new car ran really well and we’re just ready to go race,” says Trinkler. “Our goal is to leave Daytona with a top-five finish. Another top five at Homestead will set us up well heading into Barber.”

The Library of Motoring will be at Daytona with race results, photos, and comments from the team.