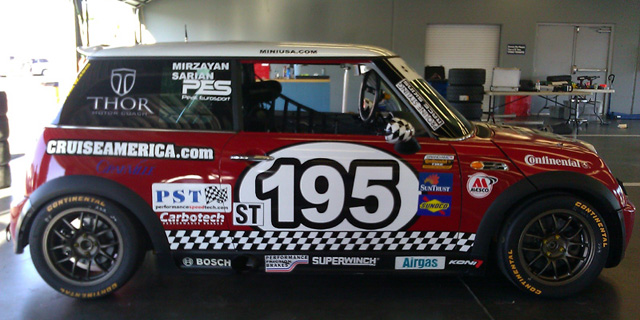 The 2011 GRAND-AM Continental Tire Sports Car Challenge season began today with the GRAND-AM 200 at Daytona. RSR Motorsports qualified and started three MINIs. It was a perfect day for racing and the Library of Motoring was there. The Daytona International Speedway track was crowded with 78 cars in two classes: GS and ST. The best position for RSR Motorsports was their start in 4th by the No. 196 MINI driven by team newcomer Ron Farmer. Farmer and co-driver Jason Hart ran a consistent race near the front. The No. 198 MINI driven by Sarah Cattaneo and then Owen Trinkler seemed to struggle some in the early stages but steadily worked their way through the pack. Retiring after 24 laps was the No. 195 MINI of VJ Mirzayan and Chris Sarian. The ST class was won by the No. 171 Volkswagen GTI of APR Motorsport but RSR Motorsports had two top-ten finishers.

We spoke to Ron Farmer after the race. He comes to RSR Motorsports after several years of racing Corvettes and is adjusting to the front-wheel drive and short wheelbase of the MINI. The MINI doesn’t have the best aerodynamics and he said he could feel the effects of the draft at 148 mph on the straightway. His No. 196 MINI sustained some front bumper damage and lost some black trim pieces when he was clipped by a passing GS-class Porsche. Ron was very enthusiastic about the MINI’s performance and is looking forward to some of the tighter courses in the series. Thanks Ron for taking the time to chat with us.

One thought on “RSR Motorsports at the GRAND-AM 200”