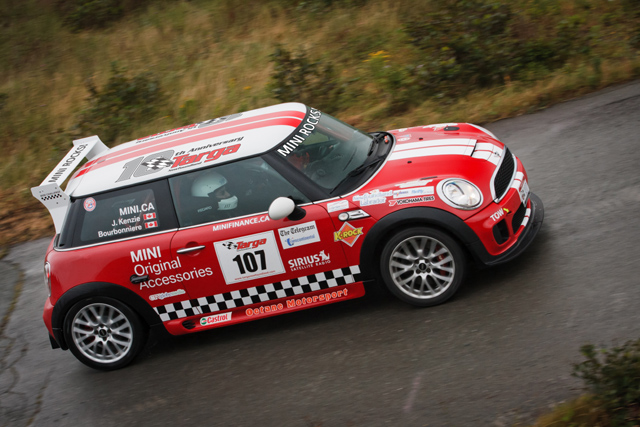 We have long followed the success of Jim Kenzie who brought MINI back to rallying long before the new MINI WRC Team.  He is back with MINI for the 10th annual Targa Newfoundland which will run from September 10-17, 2011.  Kenzie does not drive a MINI Countryman like the WRC team; he drives a rally-prepared version of the MINI CHALLENGE John Cooper Works (R56).

From the Team Octane press release:

ST. JOHN’S  (September 5, 2011) – A little history, a strong tradition and a big helping of speed will help MINI Canada build on its winning record when a spectacular red MINI Cooper Works Challenge car pulls up to the start of the 10th annual Targa Newfoundland international rally here.

It will be the ninth start for a MINI Canada entry in the event, a record no other manufacturer can touch. And if driver Jim Kenzie and co-driver Brian Bourbonniere can pull off a fourth victory in the tough Open Division competition, it will be the best performance by far for any manufacturer in the event’s 10-year history.

Kenzie, of Milton, Ontario, and Bourbonniere, of Lawrencetown, N.S., are back to defend the Division title after a win in 2010. They already have three wins, a second and a third in Canada’s longest and toughest motorsport event. Kenzie is one of just a handful of competitors who have contested every Targa Newfoundland for the past 10 years.

The team’s history at Targa includes the first win for MINI in an international rally since its re-introduction in 2002, and the brand’s long association with the sport going back to victory in the Monte Carlo rally in the 1960s has made the popular MINI a fan favourite as well as a regular contender in Newfoundland. And with the company committed to a campaign in the World Rally Championship beginning next year, the strong, fast and nimble cars are closely associated with a sport that tests durability and reliability as well as outright speed.

The MINI Challenge car is a purpose-built competition car, created by the company as the basis of a one-marque road race series in places like the U.K., Australia and continental Europe. Race suspension, improved brakes, an on-board air-jack system and dazzling aerodynamic kit including front splitter, rear diffuser, and high-downforce adjustable rear wing make the little red rocket a serious contender.

“The MINI and the team delight fans everywhere they go. Jim and Brian have made friends and fans all across the province, and they continue to post results that are the envy of every team here,” enthuses Targa organizer Robert Giannou. “They are terrific ambassadors for MINI and we’re delighted to have them back.”

Owned and operated by Newfoundland International Motorsports Limited, Targa Newfoundland is one of three internationally recognized Targa motorsports events in the world. The 10th annual Targa Newfoundland will start in St. John’s on Saturday, September 10, 2011, and end back in the capital Saturday, September 17. The competition will cover more than 2,000 kilometres of the challenging, twisty roads of the central and eastern portion of Newfoundland, including up to 450 kilometres of closed-road, flat-out Targa stages.

We’ll be following the rally and reporting on Team Octane’s progress.