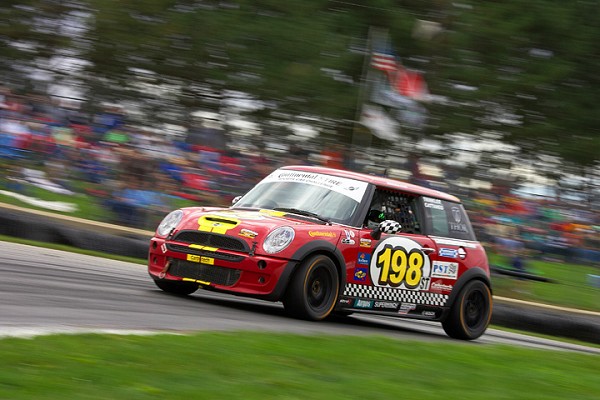 RSR Motorsports fell a little short in their attempt to capture the GRAND-AM Continental Sports Car Challenge team championship.  They had the pole in the No. 198 MINI and were just nine points out of first place going into the final race at Mid-Ohio.  But mechanical issues less than 30 minutes from the finish kept them from completing the win.

Cattaneo and co-driver Owen Trinkler entered the season finale just nine points out of the championship lead. Trinkler was poised to take the race win and the championship for RSR Motorsports, Cruise America and Thor Motor Coach before the shift cable broke with only 20 minutes left in the 2.5-hour race.

Still, the race wasn’t without its high notes. It was the first time Cattaneo has led the ST field. “I figured if I was out front, I could bring the car back in one piece. That was my motivation!” she says. “It was tough this year. Everything was a challenge, which only made us work that much harder to get to where we did. We always wanted to do better. Working with Owen this year made my driving improve so much. I can’t thank him enough.”

Trinkler and Cattaneo wound up fourth in the ST team championship. While he was still leading the race, Trinkler teamed up with Chris Puskar in the No. 195 RSR Motorsports MINI. “We were working together. He was pushing me down the back straight. It felt like we were at Daytona the way we ran together and could push past cars with more power,” Trinkler says.

See the official results from the GRAND-AM website.  The video shows highlights from the race.  The No. 196 MINI gets spun at 0:40.