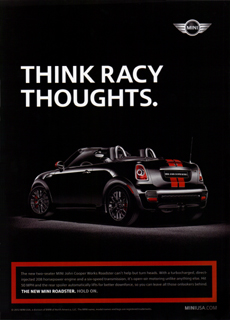 The new two-seater MINI John Cooper Works Roadster can’t help but turn heads. With a turbocharged, direct-injected 208 horsepower engine and a six-speed transmission, it’s open-air motoring unlike anything else. Hit 50 MPH and the rear spoiler automatically lifts for better downforce, so you can leave all those onlookers behind.

MINI USA has released another MINI Roadster ad to follow up on the previous TOPLESS THRILLS. print ad.  This version features the MINI John Cooper Works Roadster in Midnight Black.

This print ad can be found inside the back cover of the May 2012 issue of Motor Trend.