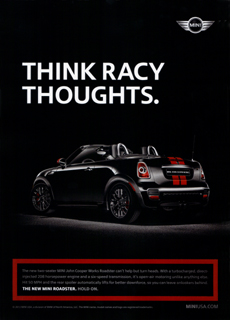 The new two-seater MINI John Cooper Works Roadster can’t help but turn heads. With a turbocharged, direct-injected 208 horsepower engine and a six-speed transmission, it’s open-air motoring unlike anything else. Hit 50 MPH and the rear spoiler automatically lifts for better downforce, so you can leave onlookers behind.

We previously featured this MINI JCW Roadster print ad, but here we have a slightly reworded version.  So you completists collecting MINI ads will want to pick up this one, as well.

Although there is one more MINI Roadster print ad that is interactive, here is the existing collection of MINI Roadster ads that we have seen so far.  We have one for the Cooper, Cooper S, and John Cooper Works Roadster.