MINI in the Pirelli World Challenge 2014 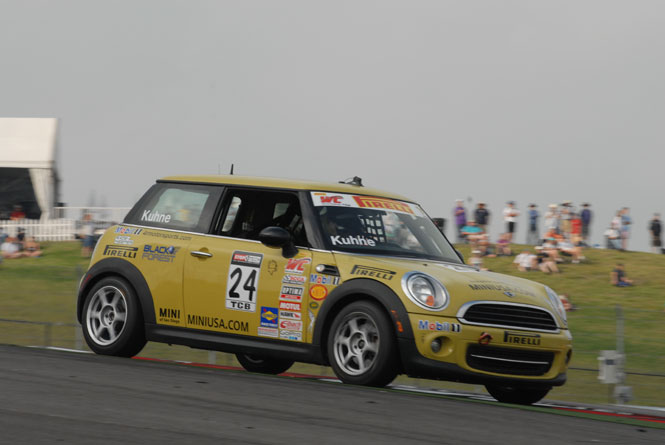 Another racing series that MINI competes in is the Pirelli World Challenge which will be in full gear with the TCB (B-Spec) class starting this weekend.  Each weekend in the series will feature two races.  MINI has had previous success in this series with Robbie Davis winning the 2013 Pirelli World Challenge Championship.  For 2014, Tyler Palmer takes over driving duties for Davis in the MINI of Charleston #37 MINI. This week MINI USA announced they would be sponsoring Palmer’s team. 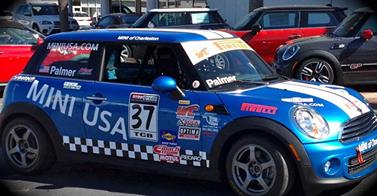 Photo by MINI of Charleston Racing

Woodcliff Lake, NJ – April 25, 2014…MINI USA is proud to announce Tyler Palmer as the newest addition to the MINI Motorsports program.  Palmer, a California native, will make his MINI Motorsports debut this weekend as the Pirelli World Challenge® Series makes its first trip to Barber Motorsports Park in Birmingham, Ala.Last season, Palmer made a total of eight trips to the podium in his nine Pirelli World Challenge starts, including third place and runner-up finishes at the Cadillac Sonoma Grand Prix. In the same year, the then 19-year-old driver claimed fourth and second place finishes in Rounds 9 & 10 at Mid-Ohio Sports Car Course. The rookie sensation also capped off a remarkable 2013 season with a pair of wins at the FOAMETIX Grand Prix of Houston.“Tyler is a great addition to the MINI Motorsports family and will certainly add to the rich racing heritage that started back in 1964 with our first victory at the world famous Monte Carlo Rally,” said Chris Potgieter, Product Manager, MINI USA. “We look forward to an exciting season and to seeing MINI on the podium again this year!”Palmer will race in a 2012 MINI Cooper Hardtop owned by MINI of Charleston Racing, the same MINI that was driven to the 2013 Pirelli World Challenge Championship last season by Robbie Davis.Born and raised in San Diego, Palmer attends Mira Costa College in nearby Oceanside, Calif. When he’s not at the track, the aspiring racer enjoys dirt biking, surfing, golfing and working out.  Palmer is also a go-kart racing instructor.In addition to representing MINI USA on the track, Palmer will also make appearances at the MINI Performance Motoring School and the MINI Teen Motoring School with Miles Ahead at Indianapolis Motor Speedway. But that’s not all! Palmer will also make an appearance at this year’s MINI TAKES THE STATES, the legendary cross-country rally for MINI owners that takes place every other year.  Be sure to check our website, MINITAKESTHESTATES.COM, for the full schedule.You can learn more about Tyler Palmer at www.TylerPalmerRacing.com and find him on Facebook at Facebook.com/TylerPalmerRacing.

Pirelli World Challenge racing can be watched online at http://www.world-challengetv.com.