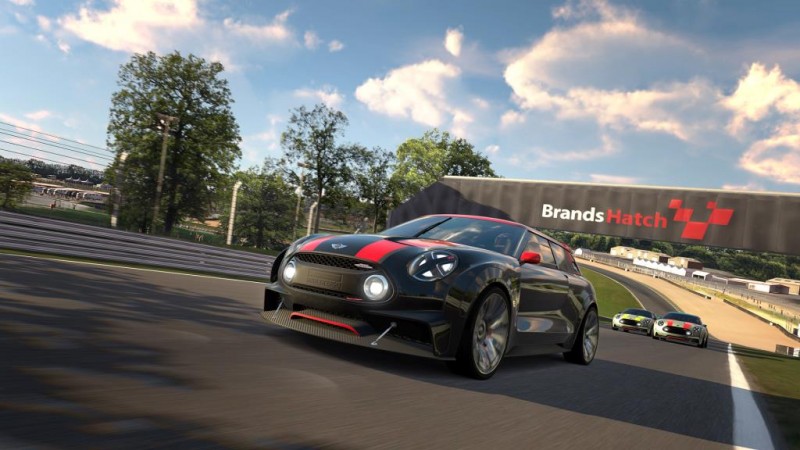 Munich. Inspired by the brand’s legendary motor racing success, the MINI Design Team has created the essence of a MINI to enable maximum racing performance in the game Gran Turismo®6 for PlayStation®3. “MINI has many highly emotional achievements to its name in motor racing. The MINI Clubman Vision Grand Turismo literally puts these onto the virtual race track in Gran Turismo 6. The image of a go-kart on the road has recurring appeal,” says Anders Warming, Head of MINI Design.

The 395 hp engine accelerates the MINI Clubman Vision Gran Turismo from 0 to 100km/h in just 3.5 seconds. A sequential 6-speed transmission directs engine power to the permanent all-wheel drive system, guaranteeing optimum power transmission at all times, while gear shifting is achieved using wheel-mounted paddles. Fully adjustable dampers at the front and rear ensure an optimum connection with the road. The maximum speed is up to 290 km/h, depending on the gearbox ratio (specific to each race track).

Pure motor racing flair in the front section.
The uncompromising orientation of the MINI Clubman Vision Gran Turismo from 0 to 100km/h to motor racing is apparent at first sight: enormous air inlets and precise air ducting surfaces dominate the low front perspective. The large central air inlet reaches down to just above the ground, almost merging the MINI Clubman Vision Gran Turismo visually with the virtual road surface. The front splitters regulate airflow to cool the high-performance engine and brakes. The wide track with broadly flared wheel arches promises agile handling when taking bends at speed. At the same time, the horizontal alignment of the air ducting elements makes the front section appear very low, with precise lines highlighting the wide track. As a technical highlight, the front apron and flat underbody are made entirely of carbon. This not only reduces air resistance, it also slims down overall weight in the chase for the best lap time.

All the familiar MINI design icons in the front section also reveal a highly dynamic design. The elliptical headlamps feature a black “X” familiar from the long-distance races of bygone days. Back then the headlamps used to be masked so as to prevent the headlamp glass from splintering as a result of stone impact or collisions, thereby avoiding broken glass on the track. The MINI Clubman Vision Gran Turismo echoes this element, giving it a modern interpretation as four separate LED light elements separated by a black X inside the ellipse. The continuous, hexagonal radiator grille has a flat, sporty design to emphasise the car’s wide track and encased by a high-end black chrome surround. Further references back to the brand’s glorious rally achievements of yesteryear are the upright windscreen wipers, the small additional headlamps and the accentuation stripes on the bonnet, roof and rear.

Maximum sporty flair in the side view.
The side reveals a MINI styling that has been injected with a whole new dynamic power. The car “crouches” on the road with a flat and broad silhouette. The characteristic curves dominate the upper section, making the MINI Clubman Vision Gran Turismo instantly recognisable as a MINI. The elongated roof and the low, continuous windows appear to stretch the virtual MINI. In conjunction with the rising shoulder line they trace a slight wedge shape. The voluminous shaping below the narrow window graphic is an instantly striking feature. Almost reaching down to the ground, the powerful bodywork conveys optimised aerodynamics and perfect road-holding in visual terms. The elongated doors are embedded in muscular, tightly modelled surfaces. Precise lines emphasise the broadly flared wheel arches at front and rear – a reference to the permanent all-wheel drive. The dynamism and clarity of the lines increase in the direction of the road. This gives the surfaces a more athletic effect as well as highlighting the three-dimensional quality of the side sections. The conspicuous side sill catches a lot of light, visually reduces the height of the car and traces a line which emphasises the completely flat underbody. The wheels are placed well to the outside of the body, thereby facilitating the proverbial go-kart-style handling. 22″ bicolour rims add an elegant touch of sporty flair, while racing details such as snap fasteners on the bonnet, a small sliding window and quick-release filler caps perfectly round off the car’s side appearance.

Broad shoulders and powerful rear wheel arches.
The perspective most likely to be admired by gamers and opponents is probably the rear. Expansive wheel arches and a marked shoulder section make for a self-assured posture. In between, a three-dimensional surface design enlivens the rear view. The striking split doors of the MINI Clubman Vision Gran Turismo are given clear graphic emphasis, while the double rear spoiler ensures downforce at high speeds. As is typical of MINI, the rear lights in LED technology are designed as self-contained elements. They feature an intricate filigree design in the form of a surrounding band with rib graphic, including integrated brake lights and driving lights. The horizontal alignment of the lights underscores the car’s broad posture as well as the dynamism of the rear section.

As at the front and side, the lower section of the car features a very precise and dynamic design. Aerodynamic openings break through the smoothly modelled surfaces, giving them character and vigour. Form follows function: air outlets and ducting surfaces in carbon are located precisely where they can take optimum effect. Lower down, the completely closed and flat underbody further enhances the car’s refined aerodynamics.

Power and character from the top view.
The top view is also frequently seen in game. An athletic silhouette reveals the power and racing heritage of the MINI Clubman Vision Gran Turismo. The front section faces up to the wind with a wide track and the filigree, finely detailed body almost merging in behind. The muscular expansion at the rear means it also gains width running back to the rear axle. This is set through with precise lines and bonnet stripes that create a cohesive overall image and a general impression of self-contained unity. The continuous base line of the body remains recognisable at all times within the surrounds.

Five paint finishes provide variety.
The MINI Clubman Vision Gran Turismo would not be a real MINI if it did not offer customisation options. With a total of five colour variants, players can adapt the MINI Clubman Vision Gran Turismo visually to their own personal preferences during the game. The MINI Design Team plays with contrasts here, boldly combining apparently incompatible colours which nonetheless interact to fascinating effect. The basis is always provided by Cyber Silver, a technically cool tone with a hint of mint green that offers a modern interpretation of the classic British racing tradition. This paint finish varies in appearance depending on the light angle, showing up the full depth of the car’s powerfully expressive surfaces. Contrasting with the body colour there are stripes running across the bonnet and roof, the roof itself and the accentuation stripes alongside the bonnet stripes, known as pin stripes. In the standard version, the roof makes a self-assured statement in Reflector Blue with accentuation stripes in Radiant Orange and Curry. In the other variants, the roof is available in Mirage Black or Space Green. Depending on the roof colour, the bonnet stripes and pin stripes then provide fascinating modern contrasts in Radiant Yellow, Radiant Green or Radiant Orange.

BMW Group gaming involvement.
To mark the 15th anniversary of the franchise Gran Turismo producer and President of Polyphony Digital Inc. Kazunori Yamauchi invited leading automobile manufacturers to contribute to the successful Gran Turismo series. Design departments were called upon to cast their eyes into the future and share their groundbreaking concept models with the gaming community. The virtual automobiles are being integrated into latest iteration of the new game Gran Turismo 6 for PlayStation 3, in the form of online updates. Head of BMW Group Design Adrian von Hooydonk: “The MINI Clubman Vision Gran Turismo is in fact the second cooperation in connection with Gran Turismo 6. I very much appreciate the opportunity to collaborate with Kazunori-San because he is just as interested in automobile design and performance as we are at the BMW Group”. The BMW Group has been active in the area of gaming for many years. The company attaches importance to being able to bring to life concepts such as the MINI Clubman Vision Grand Turismo as well as classic and current BMW Group vehicles in an interactive way for a wide audience and not just present them passively in the form of images and trailers.

Gran Turismo 6.
Gran Turismo is an award-winning racing simulation game franchise first releases in 1998. Created exclusively for Sony PlayStation® it has become one of the most successful franchise in the world. According to Sony Computer Entertainment, more than 72 million copies of the game have sold in over 100 countries.

The latest iteration, Gran Turismo 6 for PlayStation 3, was released in December, 2013 and features 39 realistically reproduced race tracks and over 1200 cars reproduced in authentic HD graphics.

A MOTORER’S GUIDE TO WAITING.

An activity book for the kid in you.

This 8-page booklet measures 8.5″ x 11″ and contains various activities for kids, presumably to keep them occupied while waiting at a MINI dealership.

There is a separate BUILD YOUR OWN MINI. insert which allows one to design, punch out, and fold up a MINI Cooper S Hardtop.

The first Original MINI Accessories catalog has been released for the third-generation MINI Hardtop.  The 22 page flip brochure is filled with 17 pages of MINI accessories and 5 pages of John Cooper Works Tuning accessories. 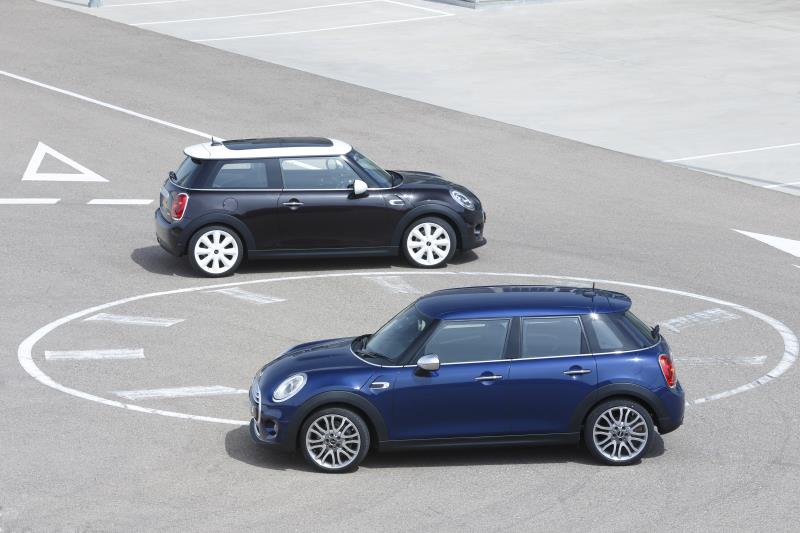 MINI has its best January of global sales with sales up 12.0% from January 2014.

Overall sales of MINI brand vehicles were also higher than ever before in January, with the brand achieving double-digit growth of 12.0% compared with the same period last year (17,373 / prev. yr. 15.510). “Following on from our core model change last year, MINI is aiming for sustainable growth in 2015,” said Peter Schwarzenbauer, Member of the Board of Management of BMW AG responsible for MINI, BMW Motorrad and Rolls-Royce. “The strong sales of the new MINI 3 door and 5 door models we saw in the fourth quarter have continued into the new year and I am confident that these and other new upcoming models will see MINI building on this momentum throughout the year,” Schwarzenbauer added. Sales of the new MINI 3 door are up 33.6% on the same period last year, totalling 7,502 units (prev. yr. 5,616) and the new MINI 5 door model was delivered to a total of 3,876 customers worldwide. 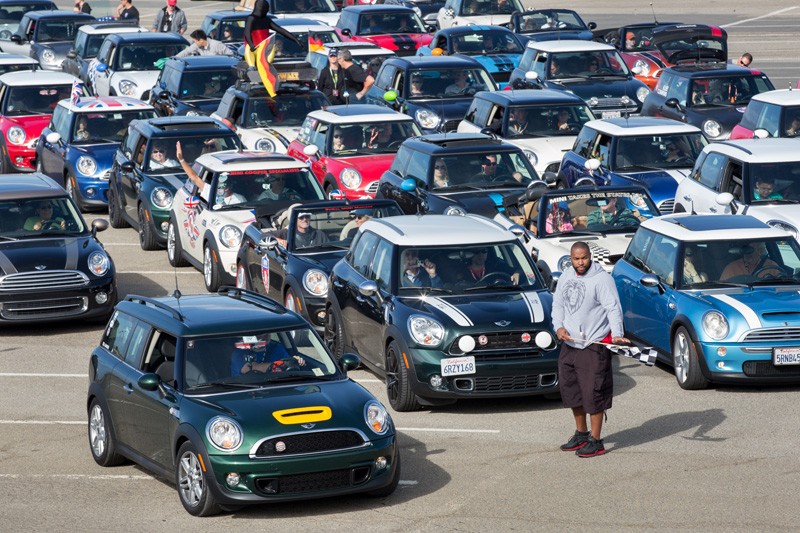 Now that Winter has passed its halfway point, the major Mini and MINI events season will begin.  There is no MINI TAKES THE STATES this year, but all of the regular regional meets are back for 2015.  There will be another Guinness World Record attempt for the largest number of MINIs in a single parade at MINI on the Mack.  After a year hiatus, A MINI Vacation in Vegas returns with AMVIV 11.

MINI Pre-Owned Vehicles
In January, MINI used automobiles (including MINI NEXT certified pre-owned) reported sales of 1,824 automobiles, a decrease of 3.0 percent from the 1,881 sold in January, 2014.