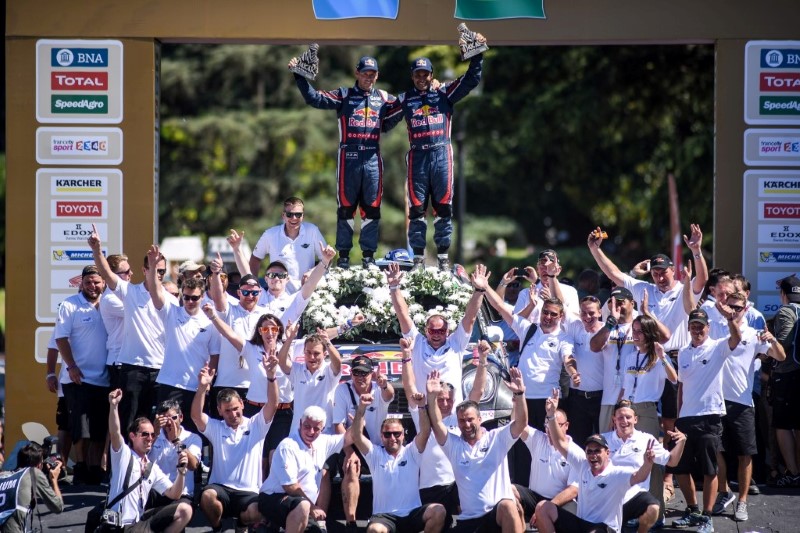 MINI’s four-year winning streak at the Dakar Rally has come to an end.  The MINI of Nasser Al-Attiyah (QAT) and co-pilot Mathieu Baumel (FRA) was the highest placing MINI when they finished second in their No. 300 MINI ALL4 Racing.

Seven MINI ALL4 Racing complete the most gruelling cross-country rally within top fifteen. Mikko Hirvonen and Harry Hunt excel in their first experience of the Dakar Rally with Hirvonen clinching the Best Rookie title in the car category.

Munich. Once again the MINI brand celebrates success at the Dakar Rally with Al-Attiyah (QAT) and co-pilot Mathieu Baumel (FRA) completing the 38th edition of the Dakar Rally as best placed all-wheel drive car. The provisional general ranking results show Stéphane Peterhansel as the quickest man overall in category and congratulations are extended to Peugeot. In the meantime, AXION X-raid Team driver Al-Attiyah is listed as finishing with a hard fought second. The result of an ongoing race appeal will determine the full and official result.

Al-Attiyah and Baumel drove a superb 9000km race in the #300 MINI ALL4 Racing to win the battle of the 4×4 vehicles, in particular against a determined effort by Toyota. Two stage wins by the Al-Attiyah / Baumel pairing ensured the outcome would be a MINI ALL4 Racing at the front of the pack.

Nasser: “To finish on the podium was really nice but I believe in myself to come back in 2017 and win again. I think it was possible to win without our one mistake, but this is Dakar – a two-week race – and everybody can make mistake; most of the best drivers make a mistake but we finished on the podium.”

Further celebration within the MINI ALL4 Racing camp will also come in the knowledge that former WRC star Mikko Hirvonen (FIN) successfully completed his Dakar debut with a well-deserved top five finish. The AXION X-raid Team (#315) driver along with co-driver Michel Périn (FRA) also achieved a fantastic stage win, which itself is complemented by a series of top five placings in the 13 stage Dakar race.

Hirvonen: “I’m really happy to be here at the finish line; a fantastic two weeks and everything worked just perfectly. The car was running well, the team did a fantastic job and with Michel everything went perfectly as well, so overall a fantastic experience.”

Spanish stars Joan ‘Nani’ Roma and Alex Haro (AXION X-raid Team #304) secured a 2016 Dakar top ten position in their AXION X-raid MINI ALL4 Racing after a dramatic fight back. Their start of the 2016 Dakar was upsetting to say the least when bad luck placed them deep in a mud hole for over 45 minutes to knock them far down the overall standings. To complete Dakar is one thing; to draw on their skills to complete in the top ten is something else altogether.

“It’s a really strange feeling to be here at the finish line,” said Roma. “Obviously it wasn’t my goal when I come here to fight for this position, but it was really hard. A positive point is the work with Alex, he made a good job.”

The #323 MINI ALL4 Racing of Harry Hunt (GBR) and Andreas Schulz (GER) was the fourth MINI ALL4 Racing to be placed within the top ten finishers. This is a remarkable achievement for the young Englishman considering, like Hirvonen, this was his first Dakar event. Consistent racing along with Schulz’s guiding hand of experience definitely made this a Dakar an event the X-raid team driver will never forget.

Hunt: “I’m so happy. I couldn’t have asked for any more really. First Dakar finish and also top ten, so I’m over the moon. It was hard, it was very, very hard but we had a relatively problem-free Dakar. A lot of that was down to Andreas, he’s so calm in the car.”

Orlando Terranova (ARG) and co-driver Bernardo ‘Ronnie’ Graue (ARG) from AXION X-raid Team (#310) also had to apply all their experience to net the top 15 finish they are credited with. Exactly like Roma on Stage 2, Terranova was a victim of deep mud resulting in many lost minutes, which was compounded by another delay due to the terrible weather conditions.

Another MINI ALL4 Racing crew who had to fight against early setback was that of Dutch duo Erik van Loon and Wouter Rosegaar of #306 Van Loon Racing. Completing Dakar inside the top 15 was an astonishing end to an astonishing Dakar, arguably the wettest Dakar on record.

Jakub ‘Kuba’ Przygonski (POL) and Andrei Rudnitski (BLR) of ORLEN Team (#327) are also credited with a top 15 finish for the MINI ALL4 Racing family. Yet again, the decision by a privateer to compete at the 2016 Dakar in a MINI ALL4 Racing paid off. This year was the first year former cross-country bike rider Przygonski had tackled Dakar on four wheels and the result justified his choice of car.

Three other MINI ALL4 Racing family members successfully completed the 2016 Dakar Rally despite overwhelming odds – odds that saw the original startline decimated by the terrain and stress of racing in the harshest conditions imaginable.

Once again the Dakar rally showed how it can destroy men and machines in one fell swoop. Therefore, the fact 10 competing MINI ALL4 Racing cars made it to the end of the Dakar pays testament to its design and durability – and also the quality of support from the service and support team from X-raid.

“The MINI ALL4 Racing made full use of its strengths and advantages. I congratulate Nasser who, once again, made it to the very top with his pace. Mikko also delivered in sensational style – to make so few mistakes in his first Dakar is truly amazing. It was an extremely gruelling Dakar – not only for the drivers but for the entire team. I’m proud of our crews and our mechanics who never gave up.”

Find more photos and videos in high resolution of previous Dakar participants in the MINI ALL4 Racing on the BMW Media Website by clicking here.