details of the hybrid MINI 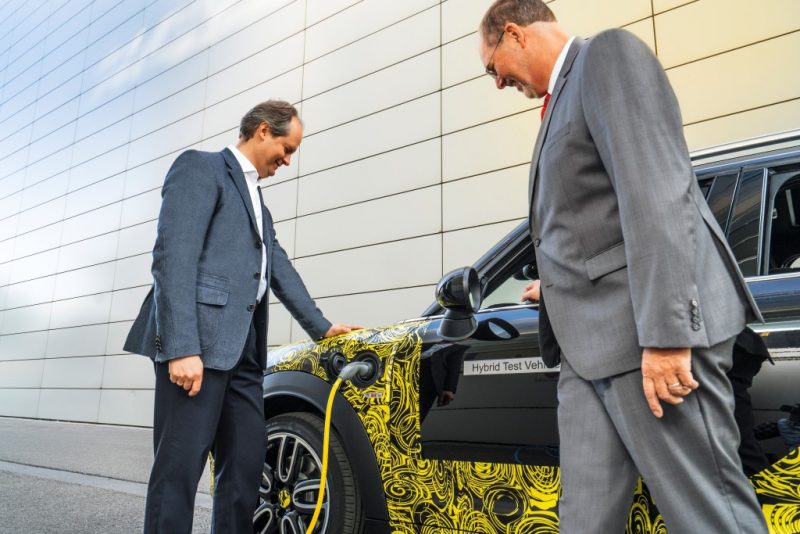 MINI released new information on the forthcoming plug-in hybrid MINI.  The model name of the hybrid isn’t given, but the photos show a MINI Countryman. 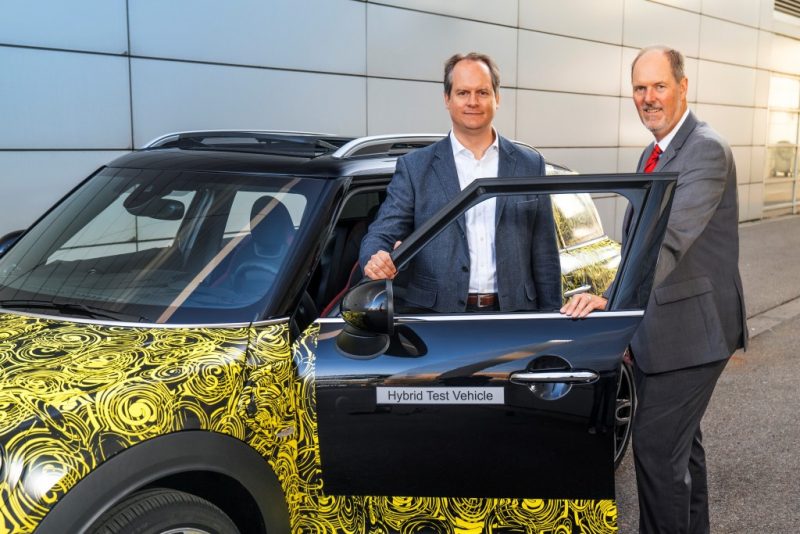 Munich. Hallmark MINI driving fun combined with zero tailpipe emissions. With the introduction of the first plug-in hybrid model by the British premium brand, this will soon be a reality. The series development process for this car has almost been completed. It features a combustion engine and an electric motor enabling purely electric propulsion for the first time in a MINI. This marks the beginning of a new phase for MINI, and offers a glimpse into a future that is charged with excitement for MINI customers and those drivers yet to experience the thrill of a hybrid.

Head of MINI brand management Sebastian Mackensen and Head of MINI series management Peter Wolf offer insight into this new near-series test vehicle, and explain how it retains go-kart feeling in the true spirit of a MINI during a test drive of this model.

“With this model we want to convince MINI customers of the benefits of hybrid drive”, says Mackensen, “and impress everyone who already has hybrid driving experience with MINI’s unique go-kart driving feel.” The key to achieving this lies in intelligent energy management which is used to control how the combustion engine and electric motor operate together. For this reason, the first MINI plug-in hybrid model is not solely focused on efficiency, but uncompromising in pursuit of driving fun. 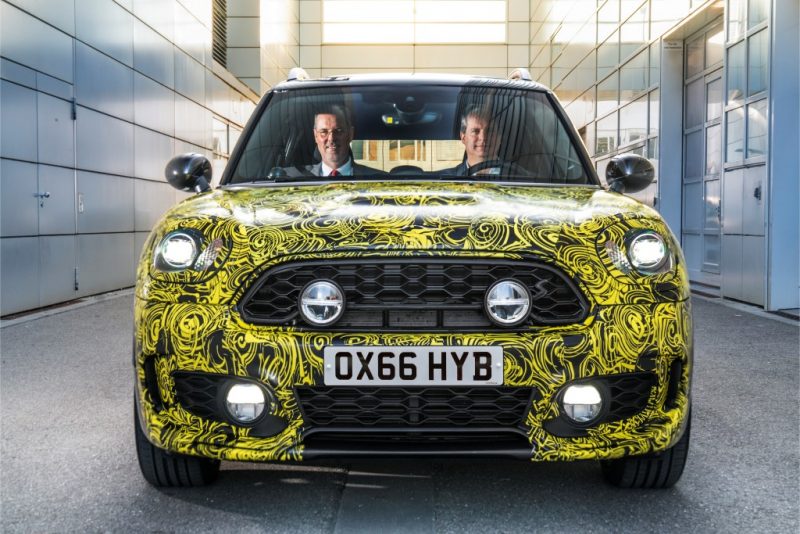 At first glance, you wouldn’t recognise the test car as a hybrid model. And that’s not because of the camouflage foil used. The charging socket for the high-voltage battery is discreetly integrated in the left Side Scuttle. Everything also looks familiar in the cockpit. The start/stop button in the centre of the dashboard glows yellow instead of red. As usual,  you simply press the button to start the car – this vehicle, however, remains silent as the hybrid model always starts in electric mode. The rpm counter in the instrument cluster on the steering column has been replaced with a power display. Keeping a close eye on this display is particularly worthwhile for the first few kilometres as it informs the driver about the electric motor’s power reserves before the combustion engine fires up. When exactly the combustion engine starts varies depending upon on the vehicle’s speed and the intensity with which the driver operate the accelerator pedal.

“After a short time, the driver gets a feel for this”, promises Wolf. And this new driving experience promises a lot of driving fun. The hybrid MINI makes full use of the electric motor’s entire torque, which is available right from standstill, allowing for catapult-like acceleration. Even after leaving the slower pace of the city, this vehicle maintains its zero-tailpipe emissions at motorway speeds. The high-voltage battery under the rear seats provides power for long-lasting electric driving. AUTO eDRIVE standard mode permits speeds of up to 80 km/h, whilst in MAX eDRIVE mode speeds of up to 125 km/h are possible. For Mackensen this is a question of character: “In a hybrid MINI model, driving electrically must also be an exhilarating experience. This means that entirely electric driving is not limited to speeds of 30 or 40 km/h, but to speeds well beyond city traffic pace.” 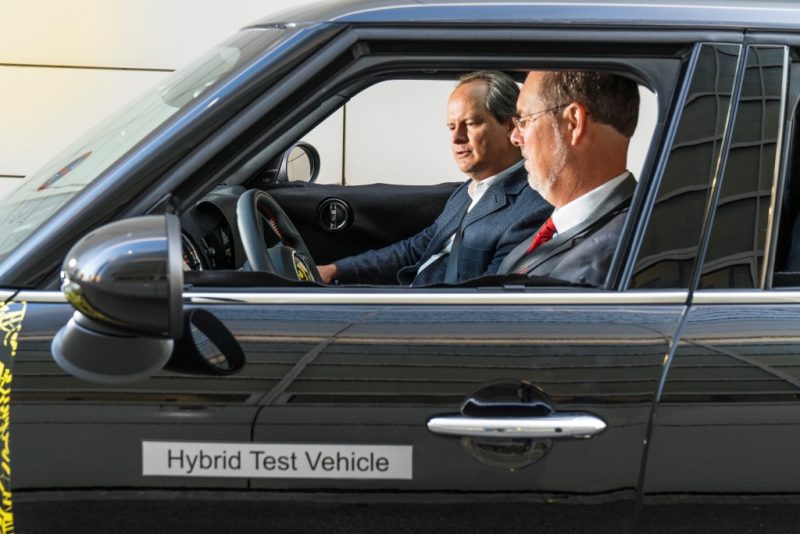 Testing the vehicle himself, Mackensen puts the car through its paces and demonstrates that you need to step on the accelerator peddle very firmly indeed to activate the second power source. Then things really start happening. With the combined output of both drives, the first MINI hybrid vehicle demonstrates unparalleled acceleration performance when compared with its combustion-only siblings.

However, MINI’s go-kart driving characteristics consists of more than just fast acceleration. Above all, this hybrid MINI has to prove how precisely it handles when taking bends on the most exciting, twisting roads. This is where MINI’s plug-in hybrid concept plays its next trump card. “As far as the chassis and suspension are concerned, nothing changes from the conventionally driven model variants”, says Wolf, “and the set-up benefits a lot from the hybrid concept”. Thanks to the eDrive components, which are positioned very low down at the rear, the car’s centre of gravity is lowered and the weight is evenly balanced between the front and rear axle – ideal for achieving an even higher level of legendary MINI agility. 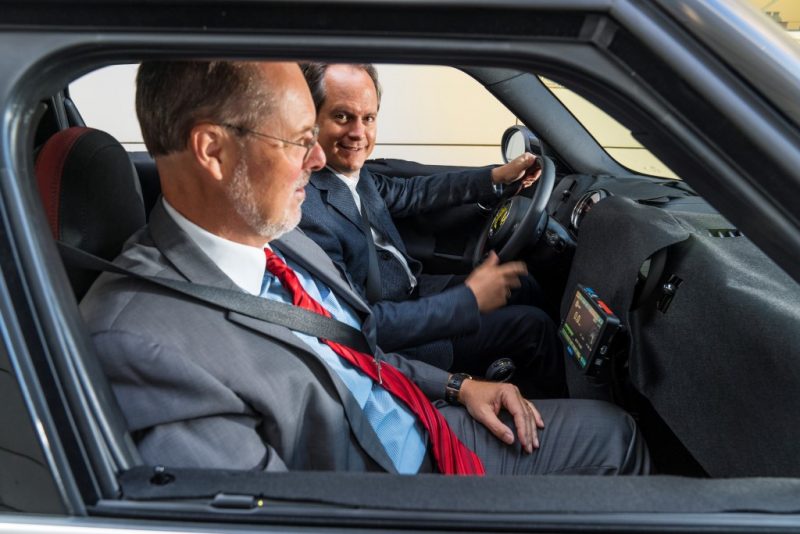 The Hybrid concept provides yet another benefit: the electric motor transmits its power to the rear wheels, the combustion engine to the front wheels. Since the intelligent energy management is linked to the Dynamic Stability Control (DSC), traction and drive stability are optimised via the drive system. “As soon as there is any risk of drive slip, the second drive unit is activated to provide additional traction when starting off or ensuring a high level of steering precision when cornering”, explains Wolf.

Intelligent energy management offers a further opportunity for both power sources to work together effectively. Driving on the motorway, Mackensen activates a third mode with the eDrive toggle switch: SAVE BATTERY. In this mode, the combustion engine powers the car whilst at the same time, the high voltage battery can retain charge at a constant level or indeed increase charge via a generator. Extended driving in SAVE BATTERY mode enables enough power generation for purely electric driving later.

After driving in SAVE BATTERY mode, the MINI drives back into town in silence at the end of the test drive. The status display in the cockpit reminds the driver to recharge the battery via wallbox or power socket. Refuelling is not necessary yet because the MINI plug-in hybrid model merely took a small sip from the fuel tank. Yet another new dimension of MINIMALISM. 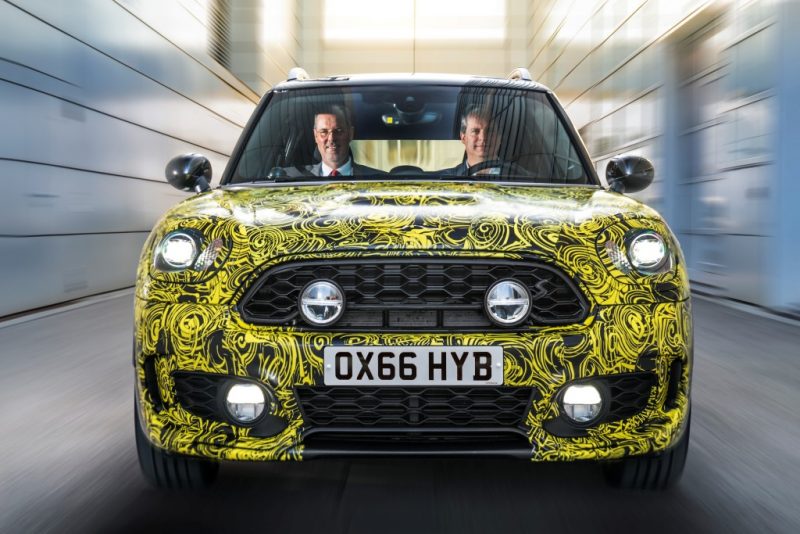