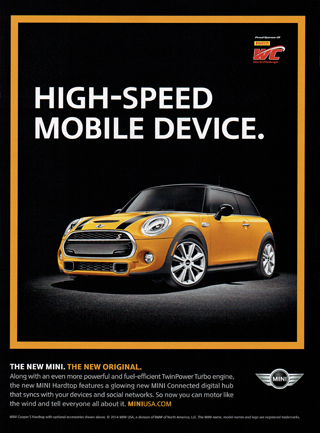 MINI USA (via their two ad agencies CP+B and BSSP) used to flood the major automotive, pop culture, and fashion magazines with clever print ads and inserts. With the increase in the use of digital media, the pace of print ads has slowed. The new, third-generation MINI Hardtop launched last month but we’ve found only two print ads.  Last month we posted the first ad from Playboy magazine.  The second ad is this one from page 15 of the Pirelli World Challenge Official 2014 Fanguide supplement to Grassroots Motorsports magazine.

THE NEW MINI. THE NEW ORIGINAL.

Along with an even more powerful and fuel-efficient TwinPower Turbo engine, the new MINI Hardtop features a glowing new MINI Connected digital hub that syncs with your devices and social networks. So now you can motor like the wind and tell everyone all about it. MINIUSA.COM

If you have spent any time on the Internet lately, you probably have seen several online advertisements for the new MINI Hardtop.  Now MINI USA has kicked off their print ad campaign with this cheeky ad.  It features a model photo page covered by a smaller removable MINI ad with the line “NICE SET OF DOUBLE L-E-Ds.”  The back of the full page shows a cartoon with a couple in a MINI Cooper S with the line “You’re right. It’s a lot bigger than I thought!”. 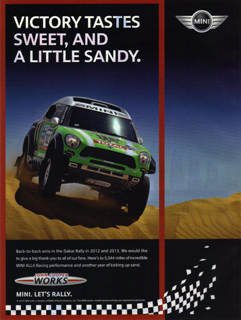 MINI USA has been flooding the magazine rack with MINI Paceman ads over the past few months. But they also created this print ad to celebrate winning the Dakar Rally in 2012 and 2013.

This ad can be found in the May 2013 issue of Popular Mechanics on page 10.

Further into the same issue is a special advertising section titled “MINI Mauler” on the MINI Countryman converted to the MINI ALL4 Racing.  The four-page advertisement article is found on pages 81 through 84, 86, 88. 90, 92, and 94. 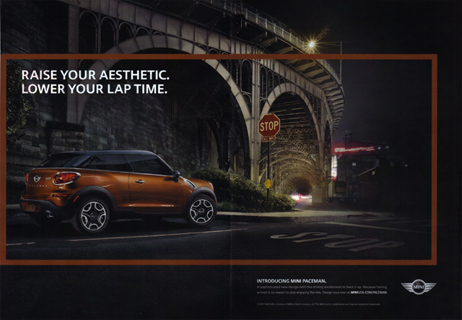 Last month we featured the first, second, and third MINI Paceman print ad.  Today we have a fourth one.  This ad features a MINI Cooper Paceman in Brilliant Copper with a Black roof.

This two-page print ad can be found in the following magazines: 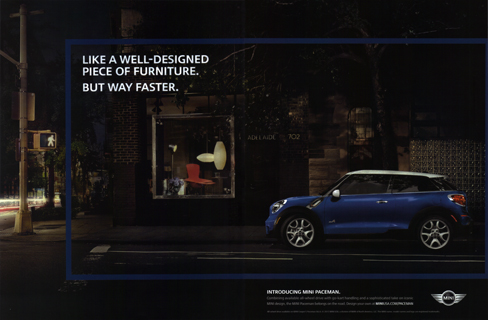 This two-page print ad can be found in the April 2013 issue of Architectural Digest on pages 2 and 3.

Yesterday we featured the first MINI Paceman print ad.  Today we have a second one.  This ad features a MINI Cooper S Paceman ALL4 in Starlight Blue with a White roof. 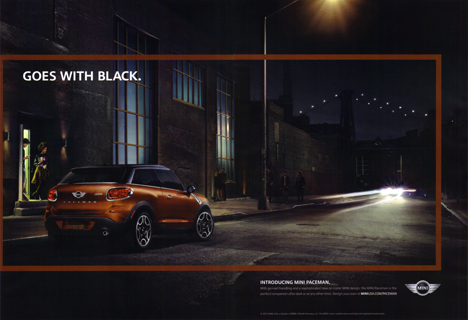 More than a week after the launch of the MINI Paceman on March 16th, we have the first MINI Paceman print ad.  The ad features a MINI Cooper Paceman in Brilliant Copper with a Black roof. 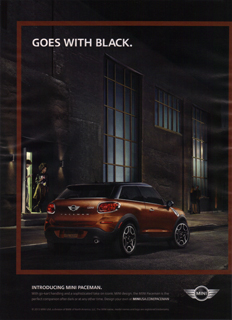 The two page version can be found in at least two magazines:

Munich. The cross-media “Design with Bite” launch campaign for the new MINI Paceman is now underway with three online videos that provide an initial foretaste of the print, TV and web elements to follow. MINI embodies the extraordinary – representing fun and adventure like no other brand. Today marked the official start for the seventh model in the MINI model line-up: The latest TV spots can now be viewed online, before airing on television worldwide in February. The MINI Paceman is making its film debut as the world’s first Sports Activity Coupé in the premium compact segment – a new vehicle segment for MINI. The TV spots, which were filmed against the urban backdrop of New York, combine thrilling driving scenes with the MINI typical sense of humour. The videos can be viewed online at http://youtu.be/urS_qrnz7rE, http://youtu.be/KmhFaRKYhxw, http://youtu.be/1SBhRfzKyRI, on the MINI Brand Channel www.youtube.com/MINI and on Facebook at www.facebook.com/MINI. More elements of the campaign can be found at www.mini.com/paceman. A separate social media special will follow in late February 2013.

The 30-second TV spot entitled “Street Attitude” presents the MINI Paceman in its urban environment. Viewers follow a young MINI Paceman driver on his night-time drive home through New York City. He comes out of a record shop and gets into his MINI Paceman – then, after a brief stop at an Asian snack bar, he takes an elegant but sporty drive through the streets and alleyways of the bustling city, passing by galleries, trendy bars and architectural highlights. The viewer only realises where the drive is heading when the garage door slowly opens to reveal the inside of the driver’s loft. Why not make the MINI Paceman part of the apartment design? There are three versions of the spot with different endings. The accompanying ads and posters are also designed to create a desire for a night-time drive in the MINI Paceman to less conventional destinations like underground clubs and design stores. Urban images and innovative slogans round out the print campaign, which will be launched worldwide from February on.

The MINI Paceman’s social media fans can also look forward to a new campaign in late February 2013. The social media campaign “Discover your inner Paceman” will use film to familiarise users with the MINI Paceman in a fun way. In an “Urban Personal Test Drive” past familiar hotspots and hidden highlights, intuition is the main guide through an interactive online world with the MINI Paceman. Users play an active role in shaping the course of their own adventure story. The use of HTML 5 technology, which supports completely new functionality, such as video and audio, and the integration of various social media platforms and apps, enables innovative control mechanisms, which open up totally new possibilities for interaction between users – in keeping with the community idea.

The MINI Paceman now also has its own “web special” on national MINI websites: A personal 3D image or Magic Eye can be generated by clicking on one of several distinctive MINI Paceman features, such as the rear headlights, wheel-case or roof-line, and choosing an exterior colour. However, the image remains hidden in an individual pattern that only reveals the silhouette of the MINI Paceman if the viewer concentrates on the pattern long enough. These self-created 3D images can also be shared with friends via various social media channels, to make others curious about the unique design elements of the MINI Paceman. Magic Eye is now available at www.MINI.com/paceman.

With its hallmark MINI go-kart feeling and exclusive interior ambience, the MINI Paceman remains true to the distinctive character and innovative, inimitable style of the British premium brand. With its powerful, dynamically-stretched coupé lines, two doors, large tailgate and two full-size individual rear seats, this seventh model in the MINI family complements the elegant sportiness of its proportions with a new rendering of the signature MINI interior.

MINI USA joined in the Mayan calendar end-of-the-world fun with these two full-page print ads in the The New York Times.  The first, “WELL, SO MUCH FOR THE 2014 MODELS.” appeared on December 21, 2012, the last day of the Mayan calendar cycle.  The second, “WE’RE STILL HERE!” was a “correction” ad and appeared the following day.  More clever ads from Butler, Shine, Stern & Partners.

The current issue of SPIN magazine contains a three-part print ad for the MINI Coupe and MINI Roadster.  Page 45 shows a MINI JCW Coupe with only the heading “SPEED METAL.” followed by page 47 with a MINI JCW Roadster with the heading “HAIR METAL.”.  The third part comes on page 75 with both MINIs and the title “GARAGE BAND.” below.

SPIN  is now a large-format magazine on thicker, non-glossy paper, so the ads are almost like mini posters measuring 9.5″ wide by 12″ tall.

These ads can be found in the May/June 2012 issue of SPIN. 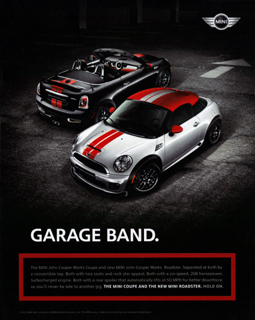