Today we have the final items in our October MOTOR-TOBER series.

Above left is the “BOO.” poster with a MINI Cooper dressed in a sheet as a ghost.  The poster above right shows a MINI Cooper carved out like a pumpkin with the phrase “SAVE A PUMPKIN. CARVE THE ROAD.” below. 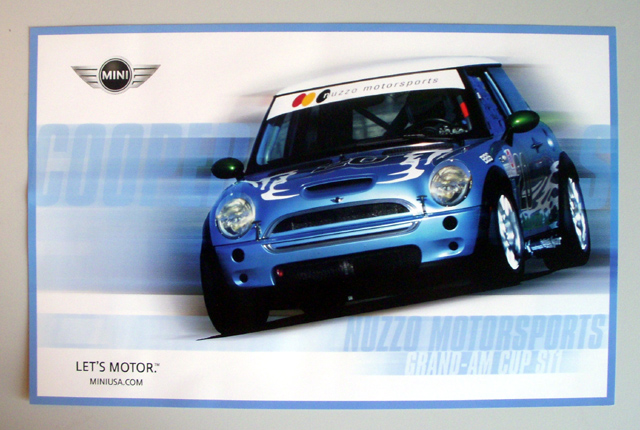 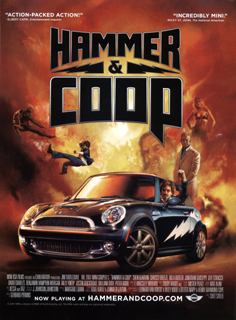 In early 2007, MINI USA launched the Hammer & Coop advertising campaign developed by Butler, Shine, Stern & Partners.  The campaign centered on Web episodes of a series starring Jim Turtledove as “Hammer” and a MINI Cooper S as “Coop”.  Pictured is the poster ad for the series.

The Hammer & Cooper poster ad can be found in these magazine issues:

Back in 2003, MINI USA offered this set of four posters with a minimalistic, whimsical design.  The set measured 36″ wide by 24″ high and consisted of:

END_OF_DOCUMENT_TOKEN_TO_BE_REPLACED 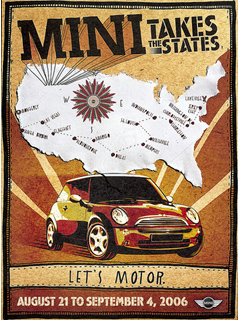 If you motored any of the fifteen legs of the MINI Takes the States 2006 cross-country road rally, you probably picked up one of these posters.

This limited edition poster was designed by Shepard Fairey, the designer of the famous Barack Obama HOPE poster.