“In a 2009, where our segment was down over 40 percent, we’re quite happy with MINI’s performance as it was the second best year since the launch of the brand in 2002, and market share increased significantly,” said Jim McDowell, Vice President MINI USA.   “For 2010, our growth story should continue driven by three factors:  an improving economy, adding dealerships in key markets of opportunity across the US, and building momentum for doubling the number of vehicles in the MINI range.” 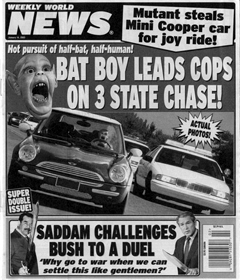 The January 14, 2003 issue of the Weekly World News featured a “story” of the infamous Bat Boy stealing a Chili Red and White MINI Cooper and leading police on a chase through Michigan, Indiana, and Ohio.  It turned out that MINI USA’s advertising agency, Crispin Porter + Bogusky, arranged the story as an indirect form of advertising.