Rounded-off square lights are designed to make the face more masculine, and blend with chunky looks and an aggressive take on the car’s grille.

However, next to the Nissan, the Countryman looks the more ordinary. The Juke’s eye-catching front end, coupé-like roofline and swollen wheelarches won’t be to everyone’s taste, but will appeal to those after something unique.

Likewise, MINI believes there are plenty of buyers who have outgrown the regular MINI and who want something bigger like the Countryman. Blown in every dimension from the standard car, the interior is now roomy enough to carry four adults in comfort. Compared to the Juke, which suffers from a lack of rear headroom, the MINI feels like a limousine, and the sliding rear seats only improve matters. 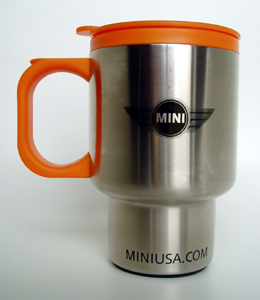 Offered in the very first MotoringGear catalog in 2002, the MINI Thermos Mug is a stainless steel and orange plastic mug. The mug has the MINI logo and “MINIUSA.COM” printed on it and includes a lid.

Owners of early MINIs in the US were sent these mugs.