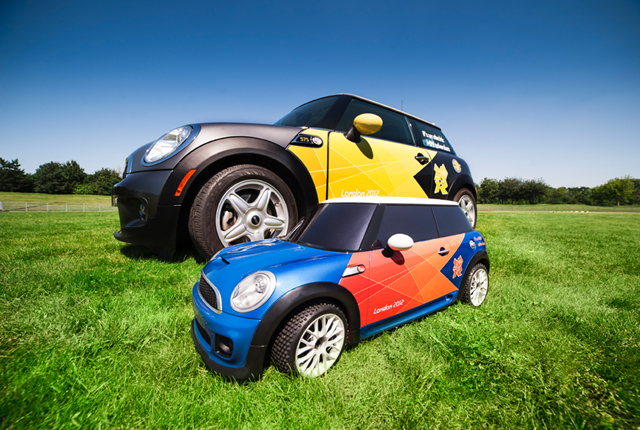 The electric-powered MINI E, retired from its field trials, is being used at the London 2012 Olympic Games as “[v]enue pool cars for operational usage and supporting the Olympic Torch Relay” while displaying new graphics (see photo).

In addition, MINI introduced the Mini MINI: “This specially developed and designed radio controlled electric car will be used on the field of play in the Olympic Stadium to ferry javelins, discuses, hammers and shots back from the field to the throwing area, saving valuable time during competition.”

MINI has had a great run the the GRAND-AM Continental Tire Sports Car Challenge series (formerly the KONI Challenge series), first with Nuzzo Motorsports in 2003 and currently with RSR Motorsports.  Due to GRAND-AM rules, the first-generation MINI Cooper S (R53) will no longer be allowed to race after this season.  That means the R53 MINI has only two more races left.  RSR Motorsports has no plans to develop a second-generation MINI Cooper S (R56) or MINI Cooper S Coupe (R58).  Thus, MINI will exit the GRAND-AM series unless another MINI team steps up.

CALLING all MINI businesses, dealers, owners and fans, this is a once-in-a-lifetime opportunity for you to carve yourself a slice of Motorsport and motoring history. You can be part of a party that will give you a host of stunning memories. You can give the iconic R53 MINI a Swansong. We want to get a British/American driver line-up in the little car with the big heart for its final two Continental Tire Sports Car Challenge races at Laguna Seca and Lime Rock. If we can raise the funding we need, these won’t just be races, they will be Motorsport EVENTS with thousands of fans, dealers and MINI owners enjoying the festivities. And it won’t cost you as much as you think.