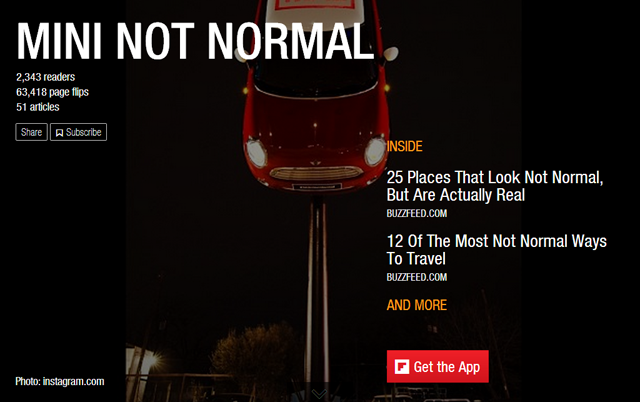 MINI has teamed up with Flipboard to curate an online and mobile magazine based around the “NOT NORMAL” theme. Flipboard enables users “to read and collect the news they care about, curating their favorite stories into their own magazine” as a mobile app and now also on a computer.

From the Flipboard blog post MINI’s Giant Leap to Flipboard:

The MINI has never been a normal car—by design. It was created in response to the Suez Canal crisis in the mid 1950s, which caused yet another gasoline embargo in England. The idea was that this car would be fuel efficient and stylish with a passenger compartment that was comfortable despite the automobile’s tiny size.

The new kind of economy car rolled off the production line in 1959 and was a quick hit. It was striking to look at and fun to drive; its minimalist sensibility created a special place in the hearts of automotive lovers for generations. In 1999, the Global Automotive Elections Foundation named it one of the 20th century’s most influential cars in the world—second only to Henry Ford’s Model T.

MINI, an advertiser in Flipboard, is also a curator: It’s created a brand magazine on the concept of “Not Normal,” where it’s sharing articles, videos and photos focused on self-expression, creativity and inventiveness.

To view the magazine, search “Not Normal” in Flipboard or click here.
~NicoleM

Read MINI NOT NORMAL on the Flipboard website, or download the Flipboard app from the Apple iTunes App Store or the Android App on Google Play.