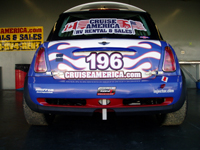 I wrote a few weeks ago about RSR Motorsports and Automatic Racing joining forces to build and race MINIs in the 2010 GRAND-AM Continental Tire Sports Car Challenge (formerly the KONI Challenge).  The first race is the Fresh from Florida 200 at Daytona International Speedway on Friday, January 29th.

The combined teams will be fielding two MINIs: the 196 co-driven by Randall Smalley and Owen Trinkler, and the 197 co-driven by Sarah Cattaneo and VJ Mirzayan.

Motorsport.com has an update on the testing at Daytona:

“The test was probably the best one we’ve ever had at Daytona, so that’s encouraging for the rest of the season. It’s not just about one race: you have to look at the big picture and where you want to be at the end of the season,” Trinkler noted.

“I think we’ve really got the handling down. The Mini performed really well in the infield during the test,” said Smalley. “The Automatic Racing crew has done a great job of preparing the Minis and we’ve got experienced drivers behind the wheel, so we’re pretty confident.”

The Library of Motoring will be attending the race on Friday and will post race results and photos as soon as possible.