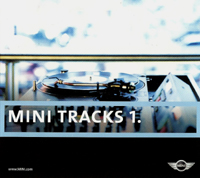 This is the first of at least two CDs in the MINI Tracks series from Europe.  This five-song CD was released in 2001.