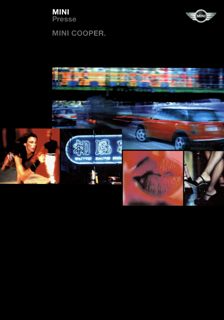 Just last month we featured the MINI Press Information (2001) press kit.  Today we have an even older one — from 2000 — a year before the MINI launched.  The reason the title is “MINI Presse” is because this one is printed in German.

The glossy card-stock cover holds a cloth-bound booklet of 15 single-sided pages.  On page 2 is a table of contents which covers (translated from the German):

Inside the front cover is a black envelope holding glossy 9.5″ by 7″ photographs.  Two photos show a Pure Silver MINI Cooper and three are of a Chili Red MINI Cooper.  The photos are dated 8/2000 on the backs.