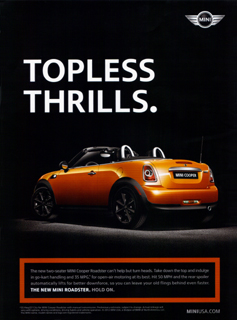 The new two-seater MINI Cooper Roadster can’t help but turn heads. Take down the top and indulge in go-kart handling and 35 MPG, for open-air motoring at its best. Hit 50 MPH and the rear spoiler automatically lifts for better downforce, so you can leave your old flings behind even faster.
THE NEW MINI ROADSTER. HOLD ON.

This print ad can be found on the back cover of the April 2012 issue of Maxim.