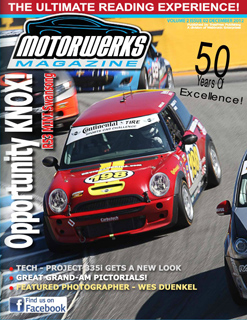 MotorWerks Magazine is a new media (online) magazine from Canada covering BMW and MINI motorsport and enthusiast interests.  The magazine is released sporadically with the just-released December 2012 (volume 2, issue 02) edition being only the fifth issue since launch in January 2011.

The December 2012 issue is the first to feature MINI on the cover.  Inside are the following MINI-related articles: