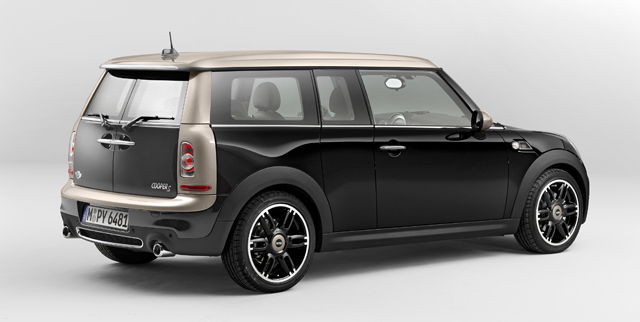 MINI has announced two new special editions for 2013, again named after London landmarks.  MINI had previously built a special edition called the MINI Hyde Park last year, but the name is being used on yet another one.  Both of the new editions feature a new roof color: Cool Champagne.

Woodcliff Lake, NJ – January 23, 2013… While fashion statements come and go, authentic style is here for the duration. As a one-off in the premium small car segment, the MINI has cemented its place in the street scene of modern cities in unmatched style. Now the British brand is poised to unveil the MINI Clubman Bond Street design model, a special edition that delivers an eye-catching statement of signature charisma and premium quality in the process. Generously equipped and with an eye for detail, this is a MINI tailor-made for style-conscious customers of the particularly discerning variety. The MINI Clubman Bond Street will step out for the first time to a public audience at the International Geneva Motor Show in March 2013 (pricing for the U.S. model will be announced closer to the official reveal).

The MINI Clubman Bond Street bears the name of the most exclusive shopping street in London, a place steeped in the tradition of classical style, the British way of life and the appreciation of quality. Setting off for a shopping trip here, in the heart of the City of Westminster, therefore is an expression of fine taste. But the MINI Clubman Bond Street doesn’t just cut a fine dash in terms of looks. Its Midnight Black metallic paintwork teams up with the Cool Champagne contrast color for the roof, exterior mirror caps, lower sections of the C-pillars and bonnet stripes to provide a striking showcase for the MINI Clubman’s dynamically flowing body lines and extended wheelbase. And, like the range of high-quality equipment provided, the bespoke interior color and materials concept – which includes exclusively designed sports seats and a leather-covered instrument panel – makes the perfect fit for the generous levels of on-board spaciousness.

The new MINI design model will go on sale worldwide in March 2013 with shoppers able to browse a collection of two engine variants in the U.S.: the 121 hp MINI Cooper Clubman and the MINI Cooper S Clubman which delivers 181 hp. Both engines are partnered as standard with a six-speed manual gearbox, while a six-speed automatic is available as an option.

Harmoniously coordinated design and equipment features for the exterior and interior allow the MINI Clubman Bond Street to stand out discreetly but unmistakably from the automotive crowd. The exclusive color scheme for the exterior boasts the addition of special details which further accentuate the distinctive character of the MINI Clubman Bond Street. Its 17-inch light-alloy wheels in Twin Spoke Black design come with an exclusive trim ring in Cool Champagne, and the side indicator surrounds and door sill strips both display Bond Street lettering.

The stylish design of the exterior and interior is complemented by a particularly high-quality array of equipment. The MINI Clubman Bond Street will greet customers with features including front foglamps and the Chrome Line Exterior package, as well as an extra dose of driving fun and comfort thanks to features such as climate control, an onboard computer, the Sport Button, a rain sensor with automatic headlamp activation, a leather steering wheel with multifunction buttons and cruise control, and height adjustment for the front passenger seat. A storage package and lighting package are among the other items included in the exclusive specification list for the MINI Clubman Bond Street. 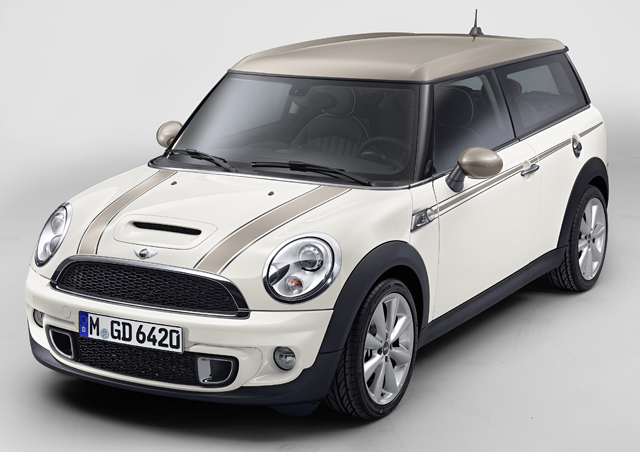 The new edition’s clear commitment to the British way of life is shared by another MINI design model. The MINI Hyde Park, likewise named after a prime area of London real estate, represents a picture of style and understatement with its combination of Pepper White exterior paintwork and the new contrast color Cool Champagne. Both the roof and exterior mirror caps of the MINI Hyde Park come in Cool Champagne, as do the bonnet and side stripes, which also have black borders.

Transparent white indicator glass and interior trim strips in Pepper White round off the neatly coordinated looks of the MINI Hyde Park, while the interior upholstery and Color Line can be selected individually from the equipment range. This design model can be ordered in both MINI and MINI Clubman versions and with the same range of engines available for the MINI Bond Street.

MINI in the US

MINI is an independent brand of the BMW Group. In the United States, MINI USA operates as a business unit of BMW of North America, LLC, located in Woodcliff Lake, New Jersey and includes the marketing and sales organizations for the MINI brand.  The MINI USA sales organization is represented in the U.S. through a network of 115 MINI passenger car dealers in 38 states. MINI USA began selling vehicles in the U.S. in 2002 with the introduction of the MINI Cooper and MINI Cooper S Hardtops.  Since then, the MINI Brand in the U.S. has grown to encompass a model range of six unique vehicles.