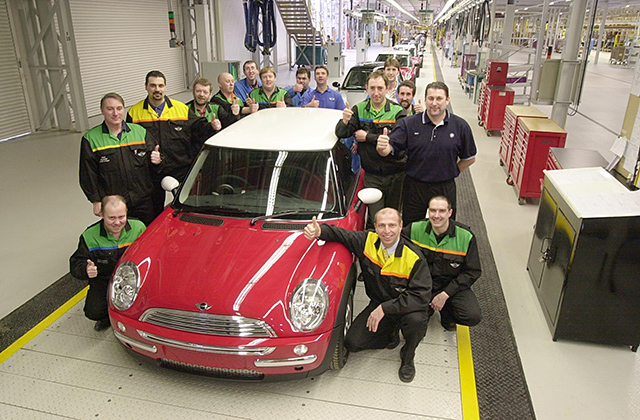 Oxford. MINI Plant Oxford celebrates 100 years of car-making this March, against a background of rising production, increased investment and continuing expansion. Today, Plant Oxford employs 3700 associates who manufacture up to 900 MINIs every day, and has contributed over 2.25 million MINIs to the tally of over 11.65 million cars that the factory has produced since 1913.

The first car built at the factory, a Bullnose Morris Oxford, emerged on 28 March 1913 and has been followed by cars from a wide range of famous British brands – and one Japanese – including MG, Wolseley, Riley, Austin, Austin Healey, Mini, Vanden Plas, Princess, Triumph, Rover, Sterling and Honda, besides founding marque Morris and MINI. The Pressed Steel Company subsidiary occupying the same Cowley complex also built bodyshells for Rolls-Royce, Bentley, Jaguar, MG, Standard-Triumph, Ford and Hillman, as well as tooling dies for Alfa Romeo. The plant has a long and impressive history of shipping cars abroad that has resulted in more than1.7 million MINIs going to overseas customers.

The plant has produced an array of famous cars, including the Bullnose Morris, the Morris Minor, the Mini, India’s Hindustan Ambassador and today’s MINI. It also produced Hondas for a short period in the ‘80s, as well as some slightly notorious models including the early Riley Pathfinder, the much-derided Morris Marina, the startling ’70s wedge that was the Princess and in the Austin Maestro one of the world’s earliest ‘talking’ cars.

There have been eight custodians of Plant Oxford over the past 100 years, beginning with founder William Morris who owned the factory both directly and through Morris Motors until 1952, when Morris merged with arch-rival Austin to form the British Motor Corporation. Morris himself, by this time known as Lord Nuffield, was chairman for six months before retiring. During the early ‘60s the plant had as many as 28,000 employees producing an extraordinary variety of models.

In 1967 BMC became British Motor Holdings after merging with Jaguar, and the following year that group was merged with the Leyland truck company (which also included Triumph and Rover) to form the British Leyland Motor Corporation. Nationalisation followed in 1974, the group undergoing several renamings until it became the Rover Group in 1986. Boss Graham Day was charged with privatising the company for the Thatcher government, which was completed in 1988 with the sale to British Aerospace. They in turn would sell the Group, which included Land Rover, to BMW in 1994.

BMW Group invested heavily in Rover, deciding early on that a replacement for the Mini would be a priority. But considerable headwinds, and an unfavourable exchange rate lead to BMW selling Rover to the Phoenix Consortium in 2000 and Land Rover to Ford in 2000. The MINI brand was retained together with Plant Oxford, as Cowley had been renamed, along with the associated Swindon pressings factory and the new Hams Hall engine plant in Birmingham that was preparing for production.

Today, Plant Oxford is flourishing with the manufacture of the MINI hatchback, Convertible, Clubman, Clubvan, Roadster and Coupé. It is currently undergoing a major investment that includes the installation of a 1000 new robots for both a new body shop and the existing facility. This represents the lion’s share of a £750m investment programme, announced in the last year, which also sees the significant upgrading and installation of new facilities at the company’s Hams Hall engine plant and the Swindon body pressings factory.

The Oxford plant has generated considerable wealth for the nation, as well as for many other countries around the world during its 100 years, providing direct employment for hundreds of thousands of employees and tens of thousands more through indirect jobs. The plant has a long history of export success, Morris products accounting for nearly 30 percent of the nation’s total exports by the mid 1930s. In 1950, the plant produced its 100,000th overseas model – a Morris Minor – and by 1962 BMC was shipping 320,000 examples of its annual production of 850,000 vehicles to over 170 countries, Oxford contributing a major part of that total. BMC was the UK’s biggest exporter in the early ‘60s, just as Morris had been in the ‘30s.

Plant Oxford has contributed to the industrial activities of a surprising number of far-flung countries too, by producing tens of thousands of cars for export in CKD (Completely Knocked Down) form for assembly in overseas factories. Countries that have built cars from kits include Argentina, Australia, Belgium, Cuba, East Africa, Ghana, Holland, Hong Kong, India, Indonesia, Iran, Ireland, Italy, New Zealand, Malaya, Mexico, Nigeria, Spain, Sri Lanka, Tanzania, Trinidad, Turkey, Uganda, Uruguay and many others. By 1967 CKD cars formed 40 percent of BMC’s exports, the kits assembled in 21 plants around the world. Morris Oxfords, Minors, MGAs, Minis, Morris 1100s and commercial vehicles were among the many models built in these distant factories. Plant Oxford’s export record is equally impressive today, no less than 1.7 million MINIs having been exported to over 100 countries since 2001.

Today, Plant Oxford forms the central element of BMW Group’s UK production network, which includes the Hams Hall engine factory in Birmingham and the Swindon pressings plant, formerly a part of Pressed Steel. The network faces a bright future as the next generation MINI family enters production over the coming years amid a trend of rising sales and exports.

The Cars
Many famous cars have been produced at Plant Oxford, several of them revolutionary. Here are some highlights:

Morris Minor 1928-32
A small, affordable car whose price Morris eventually cut to £100, ensuring considerable popularity. Together with the baby Austin Seven, it made the motor car significantly more attainable in Britain.

Morris Eight 1935-48
A big pre-war and post-war hit, this barrel-bodied Morris developed through several iterations and remained a common sight right into the ‘60s.

Morris Minor 1948-71
A major step ahead in handling, steering, braking and roominess, the Alec Issigonis-designed Minor was a huge success. The Minor was the first British car to sell over a million, a milestone celebrated with a limited run of Minor Millions painted in a dubious shade of lilac. It was sold as a saloon, a semi-timbered Traveller estate, a convertible, a van and a pick-up.

Morris Oxford III 1956-58
The ‘50s Oxford was a family car staple of the Morris range, besides continuing with the model name that had started Morris off. An unremarkable car, except that it was the basis of India’s once hugely-popular Hindustan Ambassador, Morris shipping all the Oxford III tooling to the company in 1957. The Ambassador – or Amby, as it is fondly known – remains in small-scale production today.

BMC Mini 1959-69
The revolutionary Mini was another creation from Alec Issigonis, its transverse, front-wheel drive powertrain and space-efficient packaging redefining small car design. Go-kart handling soon inspired the sportier Coopers and giant-slaying, headline-making competition performances. Classless, fashionable, much-loved and widely exported, it introduced a word to the English language and became Britain’s most famous – and most produced – car. Plant Oxford manufactured it for 10 years from 1959, its counterpart Longbridge, Birmingham factory remaining the chief UK source until its demise in 2000.

BMC 1100/1300 1962-74
The second front-drive Issigonis model, essentially an enlarged Mini with Pininfarina styling and Hydrolastic fluid suspension. The most advanced small family car on sale at the time, it sold even faster than the Mini to become Britain’s best-seller for 10 years. Launched as a Morris, it was also sold as an Austin, MG, Riley, Vanden Plas and a Wolseley, and was offered in two-door, four-door and estate bodystyles.

Morris Marina 1971-80
Much derided at the time, but the Ford Cortina-bashing Marina was a top five best-seller for years despite its simple mechanicals, and a mainstay of the plant through the 1970s. Unusual for offering a coupe version that was cheaper than the saloon, it was replaced by the lightly restyled Ital in 1980, this car destined to be the last Morris. Like the Minor it replaced, the Marina achieved sales of over one million.

Triumph Acclaim 1981-84
Essentially a rebadged Honda Civic, the Acclaim was a stop-gap model that was the product of an unusual deal struck in 1979 by BL Cars and Honda. The goal was to providing BL with a new model offering between the 1980 launch of the Austin miniMetro and 1983’s Austin Maestro, the Acclaim’s Honda-designed production lines also prompting the installation of the first robots at the Oxford plant. The Acclaim was also significant for being the first Japanese car to be built in the UK, and the last Triumph. The BL-Honda partnership eventually led to the Japanese company setting up its own UK factory at Swindon.

Rover 800 1986-9/Honda Legend 1986-8
These executive cars were unusual for being the progeny of an engineering collaboration between Rover and Honda, the two sharing inner bodywork, suspensions and some drivetrains while presenting unique body and interior designs. Plant Oxford not only built the Rover 800 but for a short period, the sister Honda Legend model too. The 800 was also part of a major export initiative to the US in the mid ‘80s, under the Sterling brand name. This much deeper collaboration furthered a fruitful period in which Japanese just-in-time and continuous improvement techniques were introduced to the plant, eventually leading to significant gains in vehicle build quality.

Rover 75 1999-2000
The first and only Rover wholly developed under BMW ownership, the elegantly styled 75 saw a wholesale improvement in both quality and dynamic standards for the brand. Production transferred to Longbridge, Birmingham, after BMW sold Rover in 2000 and ended prematurely in 2005, although variations of the model live on in China as Roewes and MGs.

MINI 2001-06
The all-new MINI recalibrated the Mini as a larger, vastly more sophisticated premium supermini in an evolution that defined a new market, just as the original car did. Widely praised for styling that honoured its predecessor with contemporary and hugely appealing flair, it also won plaudits for its handling, imaginative interior design and build quality. The MINI also introduced personalisation on a scale never before seen in a small car, firing the gun on a trend now widely copied. It exceeded its sales targets from the start – unlike the classic Mini – and was joined by a Convertible in 2002.

MINI 2006 to date
The next generation MINI hatch further refined the 2001 concept with more space, more sophistication, more advanced engines – now mainly UK-built – more equipment and more choice. This was expanded considerably by the introduction of the Clubman estate in 2007, the Coupé and Roadster in 2012 and the Clubvan in the same year. A renewed version of the highly popular Convertible appeared in 2007.