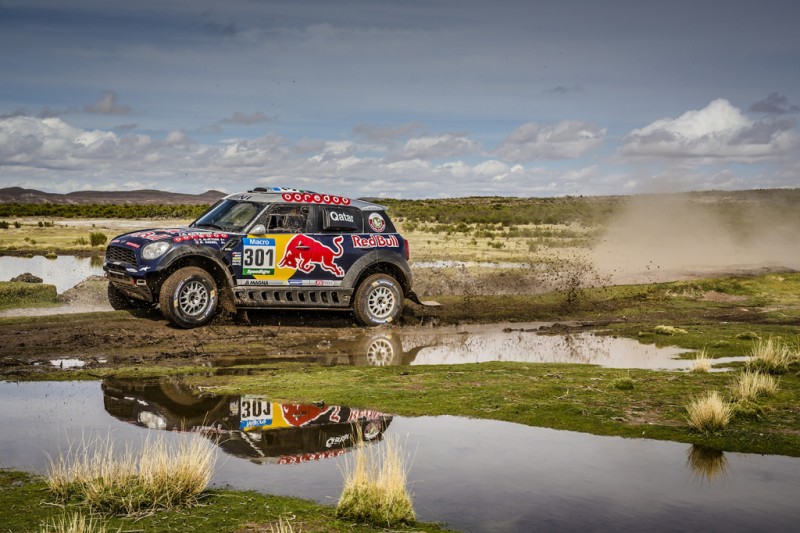 Munich (DE). The MINI brand has achieved further success at the Dakar Rally. After covering more than 9,000 kilometres spanning Argentina, Chile and Bolivia, MINI won the world’s toughest rally for the fourth time in a row. Nasser Al-Attiyah/Mathieu Baumel (QT/FR) crossed the finishing line in the Argentinian capital Buenos Aires (AR) as the overall winners, having won five of the 13 legs in their MINI ALL4 Racing.

“I promised last year when I was on the podium that I’d be back to win, and now I’m here,” said Al-Attiyah. “It was very hard to lead the race from the very beginning and to continue keeping this position on the long distance. Also because the race was really hard. I’m very happy about this great result and I want to thank and congratulate all mechanics and the team for the great job they have done during the two weeks. The MINI ALL4 Racing is an incredible car and it was again very nice to drive.”

“Nasser Al-Attiyah winning the 2015 Dakar Rally in the MINI ALL4 Racing is continuing the success story of MINI at one of the toughest races in motorsport,” said Senior Vice President MINI, Jochen Goller. “I would like to congratulate him and his team to this fantastic achievement, which the worldwide MINI community is obviously delighted about.”

“We always knew there would be many unforeseeable challenges on this 9,000+ kilometer adventure across South America and that the final result remains unpredictable till the very last days of the rally,“ said Goller. “On the other hand we also knew that the x-raid team, the MINI ALL4 Racing and of course all MINI drivers entered the competition extremely well-prepared and for this I want to personally thank the x-raid team head Sven Quandt.“

The “Dakar” entrants faced numerous unforeseeable challenges on the demanding route from Buenos Aires in Argentina via Iquique in Chile and Uyuni in Bolivia. From classic gravel rallying in Argentina and winding mountain roads through the Andes at altitudes of up to 4,500 metres in Bolivia to the extremely dry and hot Atacama Desert in Chile with its towering dunes and fine sand, the “Dakar” tested both man and machine to their limits. The drivers and co-drivers had to remain absolutely focused throughout the event.

All in all, the MINI ALL4 Racing won eleven of the 13 legs at this year’s “Dakar”. Five of these were double victories for MINI. No fewer than four MINI ALL4 Racing cars ranked among the top five cars in the overall standings.

Al-Attiyah/Baumel were joined at the top of the table by Krzysztof Holowczyc/Xavier Panseri (PL/FR) in third place overall, while Erik van Loon/Wouter Rosegaar (NL/NL) came in a strong fourth after entering the “Dakar” in the MINI ALL4 Racing for the first time. Vladimir Vasilyev/Konstantin Zhiltsov (RU/RU) – overall winners of the 2014 FIA World Cup for Cross-Country-Rallies in the  MINI ALL4 Racing – finished fifth. Aidyn Rakhimbayev/Anton Nikolaev (KZ/RU) also ranked among the top ten, securing ninth place overall. Nine of the ten MINI ALL4 Racing cars that started the race made it across the finishing line in Buenos Aires.