In his new role as Department Head, Corporate and Special Sales, Duncan will lead the team responsible for European Delivery, Corporate Fleet Sales, Executive Allowance Sales and Daily Rental Account Sales. The position is a BMW Group function supporting multiple brands within the company portfolio including BMW, MINI and BMW Motorcyles. He will collaborate closely with the sales department, regional offices, field teams, and the dealers to continue volume development of corporate and special sales accounts.

An 18-year employee of the BMW Group, Duncan has extensive business experience in various leadership positions within the organization. He joined the company as an area manager for BMW Motorcycles on the West Coast in 1998. Three years later he moved over to the MINI brand where he established the original U.S. dealer network prior to the 2002 re-launch of the brand in the market. Duncan then transferred over to the BMW brand in 2004 as Center Development Manager in the eastern region before being promoted to Regional Sales and Marketing Manager in 2006. He rejoined MINI in 2009 first as Department Manager of Product Strategy, later assuming responsibility for MINI Sales and Aftersales in 2010, and finally leading the MINI organization since 2014.

Thomas Felbermair replaces Duncan as the Vice President, MINI Region Americas. Felbermair will focus on driving sales, service, customer and dealer satisfaction, overseeing the business operations for the brand in the Americas region. He most recently held a similar postion in Germany as Vice President for MINI in the European region.

Felbermair’s automotive career spans more than two decades across multiple aspects of the business from sales and product launches to sports marketing and sponsorships. While much of his background is rooted in sales, Felbermair spent a significant portion of his years in the industry supporting the Porsche Michelin Supercup. He began his career at Audi and then transited to Porsche where he focused on Formula 1 motorsports events, marketing, dealer development and product management. Felbermair later returned to Audi to become the Head of Sales for the brand in Germany where he increased market share to a record 8.6%.  He then moved over to Lamborghini to take on the challenge of running their sales and marketing division before joining the MINI brand in 2015.

“Our business is all about our customers and improving their experience through all aspects of the customer journey,” said Ludwig Willisch, President and CEO, BMW of North America. “These changes will strengthen our business and I congratulate David Duncan on his new role in the burgeoning area of corporate and special sales and we welcome Thomas Felbermair as the new leader of MINI. I know they both will do well.”

Recently some MINI owners in the US have been receiving surprise packages in the mail.  It’s unclear why some are receiving these, but the common thread seems to be owners who purchased a 2012 MINI (so far).

The foldable plastic speakers are approximately 3″ on each side with wires and a jack.

The letter on the included card reads:

Do you know how much we appreciate your loyalty? (No? We can hum a few bars…) Seriously, in the time you’ve been Motoring, we hope it has inspired you at least once to break out into song. After all, MINI and music have made a perfect match since 1959 and into the Swinging Sixties, when top British pop icons declared their affection for their fave small ride.

Anyway, to celebrate your own Motoring musical heritage, we wanted to give you a gift that’s music to your gears: speakers to take anywhere. They’re flat, they’re fabulous, and they open to deliver the best sounds in the world: yours. 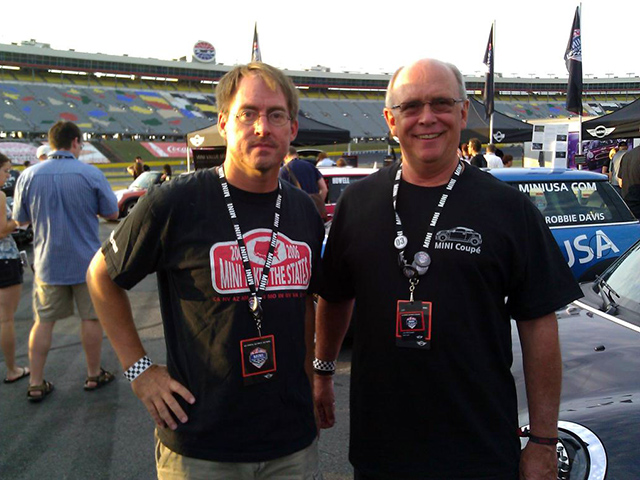