Continuing our end-of-the-year collectibles series for 2012 is the Hot Wheels X-Raycers Morris Mini.  It is available only as part of the X-Raycers 5-Pack.

The Morris Mini has a transparent green body with yellow windows and 10-Spoke wheels.  The side graphics are white checkers and a No. 1 meatball.

They are available at Toys-R-Us and other retailers. 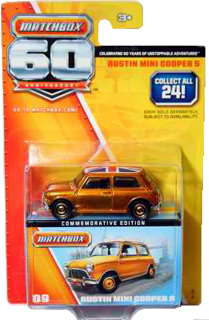 Matchbox began making die-cast cars in 1953.  So 2013 marks Matchbox’s 60th anniversary and they are celebrating with commemoration editions of 24 popular cars.

The Matchbox catalog number is Y5335. 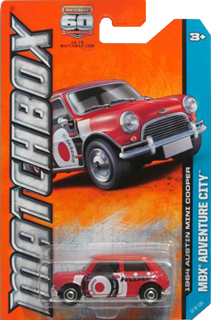 For you die-cast Mini collectors, Matchbox has included a classic Mini for 2013.

The 1964 Austin Mini Cooper comes in bright red with a large bull’s-eye graphic on the sides.  The die-cast Mini is part of the MBX Adventure City series and number 12 of 120 in the entire 2013 Matchbox line. 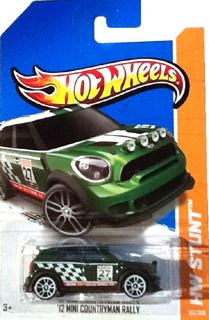 The ’12 MINI Countryman Rally is green with a white roof.  Side graphics include white checkers and the No. 27.

The QR Code on the back takes you to the Hot Wheels My Car Collector ’12 MINI Countryman Rally page. 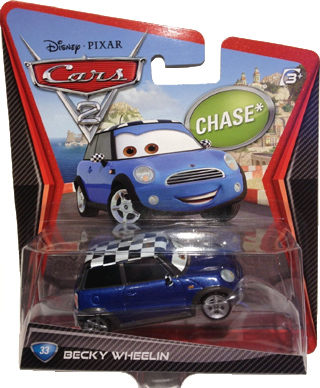 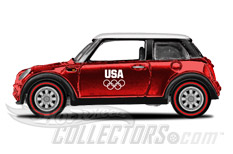 Just in time for the 2012 London Olympics, Hot Wheels created a special limited-edition Hot Wheels die-cast MINI.  The Red and White MINI with redline wheels was offered only to HotWheelsCollectors.com members.

The original price was $16.99.  It’s unknown whether these are sold out, but they will probably be appearing on die-cast collector and auction sites. 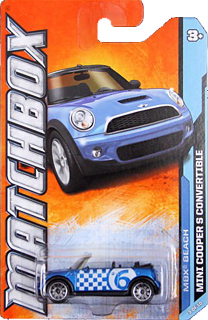 For you die-cast MINI collectors, Matchbox released its first MINI for 2012.

The MINI Cooper S Convertible comes in bright metallic blue paint with graphic white checkers and large 6 meatballs on the sides.  The die-cast MINI is number 3 of 10 in the MBX Beach series and number 13 of 120 in the entire 2012 Matchbox line.

See other Matchbox MINIs and all die-cast MINIs we have featured.

It’s rumored that the lone Hot Wheels MINI for 2012 is a MINI Countryman Rally.  Let us know if you spot it. 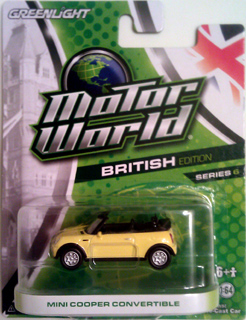 We have featured many Hot Wheels, Johnny Lightning, and Matchbox die-cast MINIs, but here is another maker of them.

GreenLight Collectibles produces a Motor World die-cast line in 1:64 scale.  They have produced seven series since 2009, most of which have included MINI models.  The MINIs are part of the Classics and British Editions. 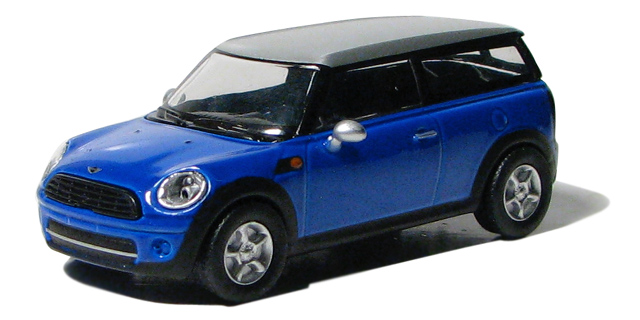 Months ago we posted the Hot Wheels 2011 MINI CHALLENGE in Blue and Chili Red.  A third color variation has appeared: White with a Red roof.  It has the same graphics as the previous two but has black wheels with redline tires.

This one is labeled MINI COOPER S CHALLENGE instead of MINI CHALLENGE but is still number 30/50.

For the collectors, we have been featuring the 2011 Hot Wheels collection MINIs.  Today we have a solid yellow MINI.  Unlike the blue MINI CHALLENGE, red MINI CHALLENGE, and Morris Mini, this die-cast MINI is not sold individually.

The yellow MINI shown comes as part of the exclusive Hot Wheels Toys”R”Us Winter 10 Pack (see below).  The product number is W6254 and sells for $10.99 in your local store or buy it online from Toys”R”Us.com. 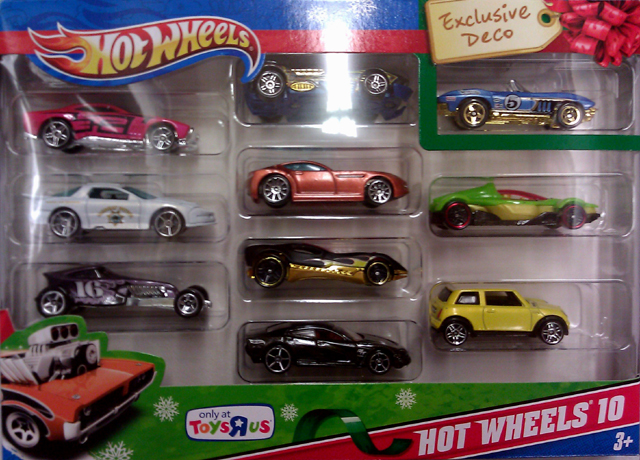